Budapest, October 6 (MTI) – The national flag of Hungary was hoisted and lowered to half mast on Monday morning in a military salute to commemorate the leaders of Hungary’s revolution and freedom fight who were executed by Austria in 1849.

October 6 was declared a national day of mourning in 2001.

The names of the 13 martyrs of Arad were read out loud in tribute. The dignitaries then moved on to pay their respects by the memorial for Lajos Batthyany, the prime minister of Hungary’s first independent government, nearby.

Later in the day, Ader attended a commemoration in central Hungary’s Szolnok, and said that the martyrs had passed on us “a legacy of freedom, faithfulness and courage”. Their sacrifice, together with ideals of freedom, independence and development “have been fired into the memory of our political nation”, the president added. Those values cannot be questioned because Hungarians “will always find a way to achieve their freedom. … That love of freedom is one of the most beautiful and most valuable components of our being Hungarian,” Ader said in his address. 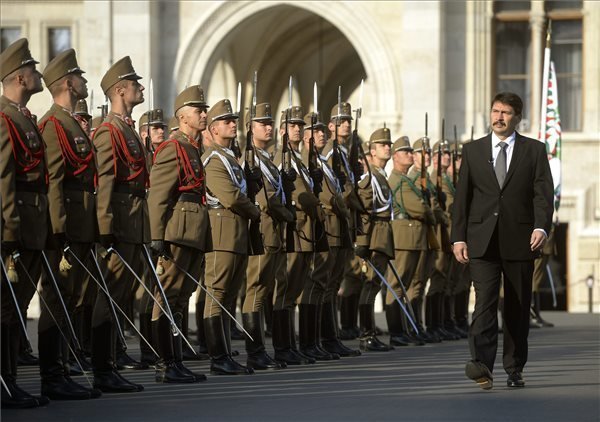 At the Batthyany memorial in Budapest, Hende said that the executed military leaders had given a personal example for what they expected from other soldiers: to serve their homeland until death. The task for today’s generations is to use the opportunities of the present age and find the ways to progress and growth to everyone, he said.

“We will join forces with anyone in the spirit of goodwill, mutual interests and shared values but we will not allow anyone to take advantage of us and lecture us for selfish interests,” he added.

Jozsef Tobias, leader of the opposition Socialists, said in a statement that Hungary must progress on the path of freedom in order to be independent and successful.

“When we remember the martyrs, we must remember how fragile and precious freedom can be. We must not waste it and must not give it up for anyone,” he said. “If we surrender any of the rights that constitute freedom, the rest will be taken away from us by despotism,” he added.

Ferenc Gyurcsany, leader of the opposition DK, said in a statement that October 6 is a memorial day for self-sacrifice and the progress that this sacrifice enables. The sacrifice of the military leaders in Arad and their supporters is an inspiration for modesty and work today, and it is the democrats’ task to work on fulfilling the dreams of the 48-ers.

Lajos Bokros, leader of the Modern Hungary Movement and the left-of-centre opposition’s candidate for mayor of Budapest, said that October 6 is a time to remember all that fought against suppression and for the freedom of the Hungarian people over the centuries. After placing wreaths on the Batthyany memorial, he said that he and his supporters are fighting as democrats against “a despotic dictatorship”.