Cooperation between state and church should be strengthened

Under the agreement 300 million forints (1 million EUR) would be provided for the upgrade of the Deák Square building and 4.7 billion forint (16m EUR) for the development of facilities in Győr in north-western Hungary. The refurbishment will be completed expectedly by 2017, the year marking the 500th anniversary of the Lutheran Church. 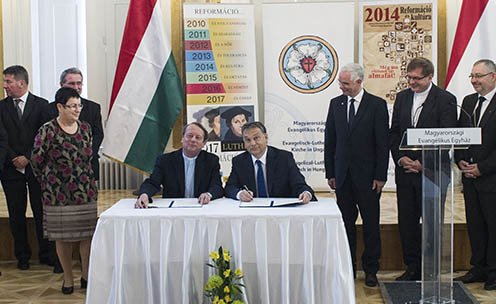 In his speech provided at the event marking the Reformation Day, the Prime Minister called for strengthening cooperation between state and church to better serve the public. The funds provided to churches by the state in fact support the Hungarian people since they help broadening knowledge through education in church schools, and providing care in social-welfare institutions run by churches, Orbán said. The Prime Minister called it a constitutional obligation of the Hungarian state to strengthen cooperation with churches in the interest of public good, with simultaneous respect for the principle of the separation of state and church.

Viktor Orbán evoked that Martin Luther had proclaimed his Ninety-Five Theses in Wittenberg on this day in 1517 when Europe had been in deep crisis. He said Luther’s message with his deed had been that the only way for Europe, and for the Christian faith, was to survive by returning to their roots.

The primary role of museums and exhibitions is to educate, engage and inspire people.…