Cooperation with the Reformed Presbyterian Association 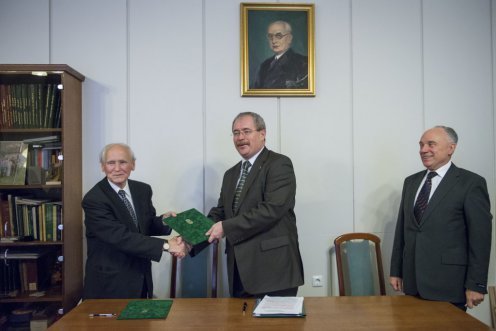 “In the third millennium, it is man’s individual and community responsibility to search for what connects us. The cause, the goal towards which we can work together; the fundamental principal according to which we can think, plan and build a future together”, Minister for Rural Development Sándor Fazekas said during the signing of the cooperation agreement between the Ministry and the Hungarian Reformed Presbyterian Association.

The document states that the parties agree that restoring the economic self-organisation and self-provision capabilities of micro-regions and the efficient use and localisation of their resources is in the interests of the whole of society. Local economic development projects also have a value-creating and value-preserving power from a cultural perspective. When planning its measures the Government shall necessarily place emphasis on the inclusion of disadvantaged areas, on reducing the territorial concentration of poverty and on putting an end to territorial and social segregation. According to the provisions of the cooperating agreement, the objectives of the parties include the realisation of farming based on domestic and local foundations to assure the preservation of the landscape and the protection of resources, with special emphasis on promoting the spread of organic farming.

In his short speech, Minister Fazekas said that Hungary’s most important economic and development policy objective is to increase employment, through which is wished to achieve several strategic goals, such as accelerating economic growth, improving the budget balance, stabilising the financing or large distribution systems and facilitating the inclusion of disadvantaged regions and social groups. Mr. Fazekas emphasised that the Hungarian Reformed Presbyterian Association is committed to this good cause and accordingly the Ministry welcomes this initiative and the signing of the cooperation agreement with the Association.

Press Office of the Ministry of Rural Development