What an opening day for Hungary at the 2016 Rio Olympic Games! Hungarian Olympians never had such a strong start as yesterday: Emese Szász won the gold medal in women’s epee fencing and Katinka Hosszú beat everyone in 400 metres individual medley swimming and to top it all, she broke the world record, her only opponent in the pool. The men’s water polo team started out great with a tie against Serbia and the only bittersweet moment of the day was judoist Éva Csernoviczki’s 7th place, who was injured, but still tried her best.

The first day started out just great with the men’s water polo match between Hungary and Serbia. We should keep in mind that the Serbian team won all world events in the last couple of years (except for the 2013 World ChampionshipsJ) and they are the absolute potential winners in Rio. But there are other great water polo nations who are threats to the title, out of which Hungary is one of the greatest.

Our team played such an amazing match that we managed to pull off a tie, which is a perfect start against Serbia. And this is only the group phase where teams try to collect as many points as they can. So from this aspect the outcome doesn’t mean much, but a good start means a lot psychologically. The Hungarian men’s water polo team truly played as a team (the first 8 goals were scored by 8 different players) and they have every chance to continue marching towards the final.

Without any further talk, we should get down to the most exciting part of Day 1, which was Emese Szász’ fascinating battle for the gold medal. To be honest, nobody expected a gold medal, neither such a confident attitude, as she hasn’t been able to achieve outstanding successes at world events in a very long time. 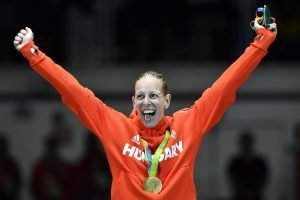 But the 33-year-old epee fencer proved statistics wrong and rose from the dead, if it was needed. As you saw her fighting her way for the mighty gold medal you realised how much she deserved it. And watching her whoops of joy and rejoicing was heart-warming.

So Hungary has a new Olympic Champion in women’s epee fencing after Tímea Nagy’s successes in 2000 and 2004. Timi was also helped by the four time Olympic Champion Győző Kulcsár, who is now Emese’s coach. Not to mention that Hungary’s first gold medal in Rio was won in fencing just like 4 years ago (Áron Szilágyi). This could be a lucky charm for Hungarians. 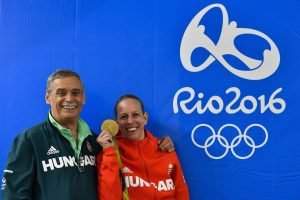 What came next was even more unbelievable. It was Katinka Hosszú, the Iron Lady herself. We knew that she was in her best shape and that she was the absolute potential winner of the 400 metres individual medley. But she came, destroyed the field, and broke the world record with such ease that it was totally worth waking up for her in the middle of the night (in Hungarian time her final was at 3:50 am in the morning). 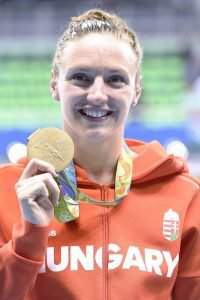 It became obvious that Katinka’s only opponent is the world record as she beat everybody with 4 seconds! She said that she felt like she was at training and was able to do everything just like they planned with Shane. It was so good to see Shane’s fanatic, tribal-like jubilance. They are partners in crime, and what they did in the last four years is incredible. New York Times even published a long article about their relationship. They are truly a winning duo and Katinka seems unstoppable. As their favourite saying goes: Hard work always pays off!!!