One of them is preparing for the 17th World Championships to be held in Budapest with a new coach, another one with a packet of parmesan and the third one with a camera in his hand. They look up to different athletes as their role models, namely Therese Alshammar, Michael Jordan and Muhammad Ali, respectively. One of them loved swimming from the very first moment, the second one does not even like cold water up to now and the third one did not dare to get into the shower at all in his childhood. What is common in the trio of Sarah Sjöström, Gregorio Paltrinieri and Adam Peaty? All three claimed Olympic gold medal in Rio and all of them won the World Championships in Kazan – and they were the first international swimmers the new Danube Arena welcomed.

The three greats swimmers arrived in Hungary, more precisely in Danube Arena at the invitation of Arena, the official partner of FINA. All of them may play key roles at the 17th FINA World Championships this summer. Seizing the opportunity of the one-day photo-shooting they looked around in the newly built arena and tried the pool, in which they hope to achieve outstanding results in July.

“The swimming pool is awesome and I was glad to see it before the World Championships” said Sarah Sjöström, Olympic champion of Rio in 100 m butterfly. She is the first female Swedish swimmer who could win individual Olympic gold medal. Since last November she has been preparing with a new coach, and apparently it was a change for the better as Sjöström is leading the world ranking in four events. “Certainly the priority is still 50 and 100 m butterfly, but we have started to work on my sprint technique in freestyle which has already proved to be effective, because in Stockholm I swam my personal best in both 50 and 100 m freestyle. I am looking forward to seeing what I can achieve through hard work in freestyle in the World Championships.”

Though her programme has extended, Sarah does not plan to follow in the footsteps of all-around swimmer, Katinka Hosszú: “The Iron Lady is one of a kind. I will stick to the four sprint events, because regeneration takes much time between the events. Moreover, Katinka competes in the most demanding events, incredible!’

“I am absolutely fascinated by the Arena, it is extremely spacious, the lights are good” Gregorio Paltrinieri went into raptures about Danube Arena. The Olympic champion in 1500 freestyle was delighted not only about his visit to Budapest, but also because his favourite team, Juventus, went on to the semi-final in the UEFA Champions League. “I was there in Torino, when we defeated Barca by 3-0. It was a wonderful experience and a huge victory!” Looking for new challenges Paltrinieri recently tried himself in open water and he finished fourth in 10 km of the European Cup in Eilat. “I liked it very much and I am planning to enter more open water races later, but definitely not in the World Championships. There I will compete only in the pool in 800 and 1500 m freestyle.” As for the preparation, no surprise, as an Italian, in addition to trainings he cares about what to put in his baggage. “I am not going anywhere without some parmesan cheese. I somehow manage to find some pasta abroad, but the original Parmigiano Reggiano is available in Italy only, so I always take some with me wherever I go.”

Adam Peaty, who won Olympic gold medal in 100 m breaststroke in Rio as the first male British swimmer after 28 years, took advantage of the opportunity to see the new Danube Arena, he even made some video recordings. “I am a visual person pretty much, I like to observe venues I am about to compete in, I watched a lot of 360 videos of Rio back then, as well. Now I am glad to be here. The Arena is beautiful, it is spacious and bright. The grandstands can seat a huge amount of fans which definitely inspires me. As soon as I saw the pool I knew that it would be a fast one” he said, while looking around fascinated. 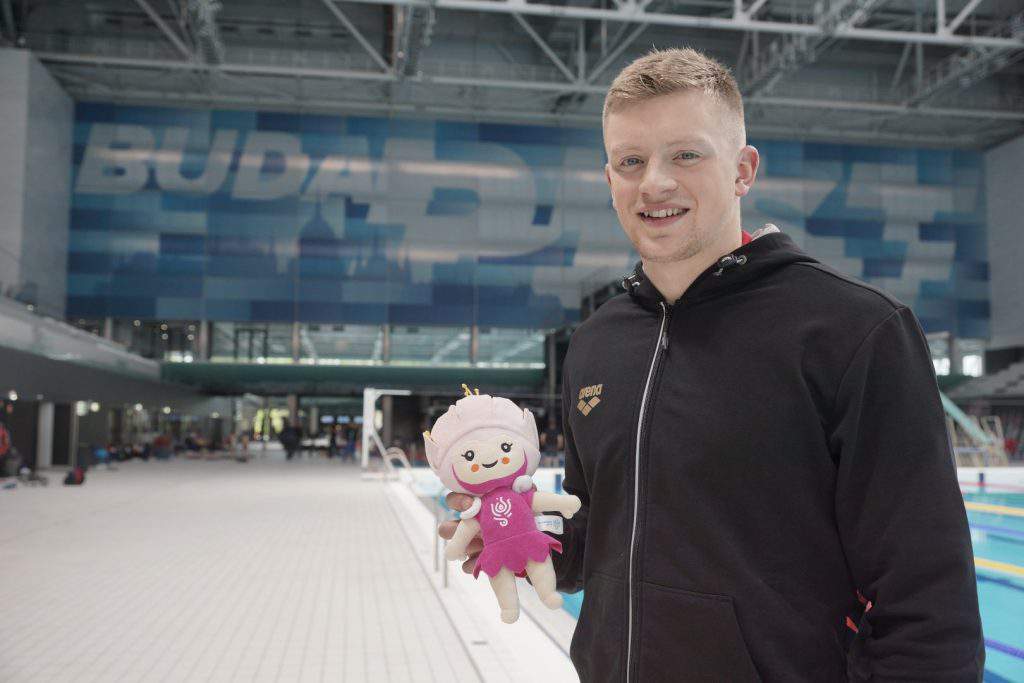 Although he claimed world-leading times both in 50 and 100 m breaststroke at the British Championships held last week, Peaty hit the headlines after giving away his latest gold medal to a 10-year-old young fan. “He was screaming my name and asking for an autograph, but I did not have a pen, I could not give anything else but my medal” told the Brits’ flower. “That is what sport is about, giving inspiration for the younger generation. If that medal inspires him for a week, a year or four years, I will be glad, since it is part of our job as sportsmen.”

Adam Peaty was popular among the kids training in Danube Arena, too, and he was pleased to stop even for a selfie. Whether another young fan could be happy for getting a medal from him in the World Championships this summer, “depends on how many medals I win” smiled Peaty whose target will definitely be world record in Budapest.

Police are still investigating the reasons. Local police officers found a Hungarian man...
At least two passengers were injured as an Iranian passenger plane went off runway…
U.S. singer Billie Eilish dominated the 62nd Grammy Awards held in Los Angeles on…
We and our partners use technologies, such as cookies, and collect browsing data to give you the best online experience and to personalise the content and advertising shown to you. I accept
Privacy & Cookies Policy