Some 120 people were evacuated from Lenti early on Saturday, after a part of the town was inundated.

Roads and houses were flooded in Redics, with the water carrying some cars off the road and damaging a bridge. Homes being flooded have also been reported from Szentgotthard, while locals and disaster management staff are protecting parts of Rabatotfalu, Rabakethely, Mariaujfalu, and Farkasfa.

Flooded roads to Oltarc, Lenti, Babosdobrete, Szentgyorgyvolgy, and Nemesnep have been closed for traffic. Sections of route 74, motorway M7 and M70 have also been closed.

The highest level of flood alert is expected along the Raba, Mura, and Drava rivers, while the Danube is not likely to rise significantly.

Flooding brooks in towns west of Budapest could also jeopardise homes in the next few days. 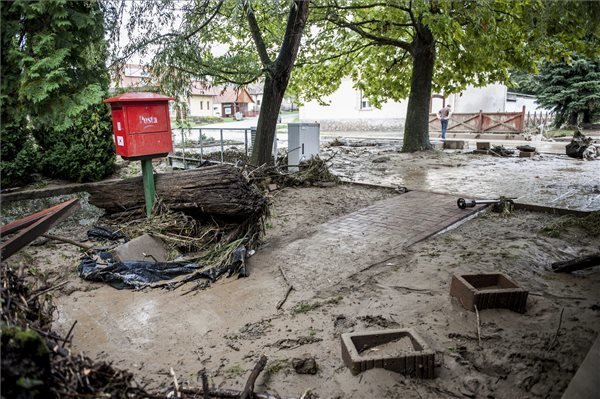 There are currently 17 road sections – mainly secondary roads – closed down in four counties of Western Hungary due to the flooding, in addition to a number of partial road closures, state road maintenance company Magyar Kozut told MTI late on Saturday.

The dike structure of the Lendvadedes rain reservoir, which caused inundations in Lenti and Redics last night, has been inspected by experts of the University of Technology and pronounced safe, state secretary of the interior ministry Karoly Kontrat said at a press conference in Lenti late on Saturday.

Gyorgy Kossa of the National Disaster Protection Agency said flood defence work still continues in forty locations in Zala county, and, due to further rainfall expected, the families evacuated in Lenti will not be able to return to their homes before Sunday.