Wizz Air UK, the UK-registered and based airline of Europe’s fastest growing Hungarian airline group, announced on the 23rd of December several new destinations from it newly upgraded front at Gatwick Airport.

There will also be new routes from Milan, Rome, Vienna, Bari and Naples to Gatwick Airport, with those flights operated by Wizz Air Hungary.

It is also important to note that tickets are on sale from the 23rd on the company’s website and on Wizz Air’s mobile application. With the sale, the prices of fares start from as low as just £ 8.99 (€ 10.6).

Some of these 14 routes will be available during the whole year while some of them will be seasonal routes. The new flights start from March 2022 onwards following the Hungarian founded company’s successful purchase of 15 daily slot pairs from Norwegian Air Shuttle at Gatwick Airport.

These aircraft will serve existing routes as well as all the new routes, with a range of destinations on offer, from the fascinating Italian cities of Milan and Rome, to hot holiday destinations such as Mykonos and Palma da Mallorca.

The company highlighted that with the launch of these new routes it will have an offer of 22 non-seasonal and seasonal routes from Gatwick Airport.

read also: Turkish plane made an emergency landing in Budapest!

Wizz Air highlighted that with the new expansion at Gatwick and with its operations at Luton Airport, the company will operate a total of 88 routes from London, reaffirming the airline’s long-term commitment to the region.

Marion Geoffroy, Managing Director of Wizz Air UK, said: ““We are delighted to be launching a host of new routes from Gatwick, following the announcement of our acquisition of new slots at the airport. Whether it’s a relaxing beach holiday in the Algarve or a city break in Montenegro’s capital of Podgorica, there are many wonderful destinations to discover and return to.” 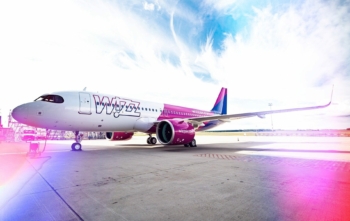