Gergely Gulyás, the PM’s chief of staff said yesterday that current epidemic rules differed from previous ones since now everyone had a free choice on whether to get vaccinated or not, and the government did not plan to introduce restrictions like those in Austria and Slovakia. The consensus is that the fourth wave of the epidemic was now peaking and the descent would start at around Christmas, he added.

Asked about vaccine mandates, Gulyás said decisions on making Covid jabs mandatory had to remain a national competency. Hungary has introduced strict vaccine mandates in workplaces where workers interact with many people, the health-care sector, public administration and schools, he noted.

Employers can also mandate their employees to get vaccinated,

he added.
More than 100,000 people got jabbed each day last week during the national vaccination campaign, Gulyás said. And though only half as many people are getting a shot this week, the daily vaccination rate is still significantly higher than in the weeks before the campaign, he added.
Because many people got their second dose over six months ago, a booster shot would be timely for them, since they are now less protected against the virus, Gulyás said.

Whether there will be another wave of the pandemic and how severe it will be depends on the number of people who get the booster jab,

Gulyás said current epidemic rules differed from previous ones since now everyone had a free choice on whether to get vaccinated or not, and the government did not plan to introduce restrictions like those in Austria and Slovakia. The consensus is that the fourth wave of the epidemic was now peaking and the descent would start at around Christmas, he added.
Important changes to come in immunity certificates in Hungary!
Regarding compulsory vaccinations, he said 92 percent of teachers in public schools have been jabbed, and the Dec. 15 deadline for a first shot still applied. Gulyás said that those who got

the Sputnik jab would have to wait for the European Medicines Agency (EMA) to approve the vaccine in order to travel freely within Europe,

and Hungarian diplomacy was doing everything possible to get the EU to change its standpoint on the Russian vaccine.

He also broached the subject of a possible fourth shot,

saying enough supplies would be at hand should the medical establishment advise getting one. Regarding the change in how ventilator data is reported, he said the new data reflected the distinction between intubation, which qualifies as a life-saving intervention, and other forms of assisted respiration. He added there was no reason not to disclose data on non-invasive ventilated patients.
He said the operative board responsible for handling the pandemic could soon decide on changes to the validity of Covid immunity cards. However, the government will not have to issue new cards even if they were to be made invalid six months after the receipt of the second vaccine dose, as they contain information on the number of jabs the card-holder has received, he said.
Meanwhile, Gulyás said he preferred not to comment on information provided by the mayor of Budapest, Gergely Karácsony, that Fudan University had

abandoned its plan to build a campus in Budapest,

adding that the government’s position on the Fudan project was clear. The question of when the land would be transferred was, for example, “a technical question”, he added. 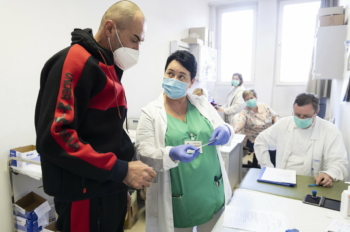