Waterpolo.hu reports that the Hungarian water polo team has gathered together on Thursday night, after their well-deserved rest following the Final Eight that took place in Genova. The FINA Water Polo World League men’s tournament starts on Monday in Budapest.

The Hungarian sports website Waterpolo.hu gives a detailed behind-the-scenes tour on the team’s Thursday training: first, they had hit the gym for an hour, where trainer György Zala made sure that every muscle is ready to dive deep. This was followed by the training in their ‘natural habitat’, the pool. 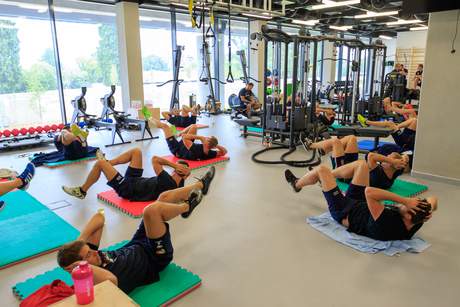 Upon inquiring about how well-rested the team is after the numerous national and international tournaments, one of the team members, Tamás Mezei, replied that

he is feeling well, having made use of the time they were given for resting, but this question should be put after the first water training.

This easily applies to the rest of the team.

The Hungarian team placed fifth in Genova during the weekend, which left a bittersweet taste: they are disappointed about not having won the competition. As they have put it, a sportsman is always competing to win and to get the shiniest medal. Still, at the same time, they are happy to have played in the final eight, which was only a dream for many teams. However, the team won the last two rounds that they have participated in.

Since last year’s FINA Championship, Budapest is flooded with aquatics events: a month ago it hosted the FINA Artistic Swimming World Series

Mezei, who just signed over to the national team from Szolnok, further digressed that the team did not have much time to ‘mourn’, as they have a new task ahead, the tournament on Monday. “Every player works toward the goal of making it into the national thirteen, so do I. During the weeks of training we all want to get into our best physical and mental shapes”, said the water polo player.

Another team member, Balázs Erdélyi, explained that so far the Hungarian team had a hard time while preparing, as their numbers were not full, so they rather concentrated on stamina and swimming, not on actual team training. Other teams are faced with such difficulties too, but there is one further challenged added to this for the Hungarian national:

the team is made up of many new members, several changes were made compared to last year.

Erdélyi expressed his delight that the Hungarian national team is finally complete, with the following words: “There is a lot of work ahead of us, but this is no excuse, as all teams go through this from time to time. Despite this, there are expectations on the side of the supporters, the media and even on our side to which we have to live up to. It can be said both about the old and new members that they really want to prove themselves. This gives a good building ground, and we trust that this ambition will be soon paired with great skills”.