“Do you wish your Christmas tree had just a little more artistic credibility?” asks BBC, who put together a list of unique, oustanding Christmas trees, which went for something a little different. And two of the Christmas trees highlighted in the article were made by a Hungarian architectural team, Hello Wood.

BBC believes that it is completely understandable if we expect a surprising artistic touch when it comes public Christmas trees, so they collected trees from different countries that somehow stood out from the average Christmas trees. The 2015 Charity Tree, built by Hello Wood & Hungarian Interchurch Aid & Design Terminal & BVA (Budapest City Image Non-Profit Kft), made it onto the list, in fact, it is mentioned in the first place.

Hungarian architectural team wanted to make Christmas merry for those who can’t celebrate in prosperity, BBC said. They believe that Christmas should be a time for communities to come together and think of those who are less fortunate. The 16 metre tall tree became the symbol of charity since, after it was taken down, its elements were divided between families in need, so that they could use them as firewood.

BBC also listed another creation of Hello Wood, which was mounted in London last year. They used 365 sleighs for the project called Let It Snow, which aimed to raise people’s attention to global warming. They also built a special Christmas tree this year, it can be found in front of the Palace of Arts and its elements will also be used up next year. 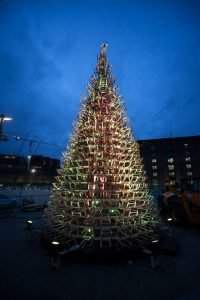 The tree in front of Müpa