According to orientpress.hu, the team of NetPincér is testing a drone food delivery system based on the example of Singapore. If the aerial couriers get brought into real action, then the delivery time could be reduced from the current 1 hour to 30 minutes. In a few years’ time the sight of drones flying in the air at 100-150 metres can become as natural as the sight of cars on the streets.

It was recently reported that Foodpanda Singapore has been testing the option of drone food delivery. If the practical tests turn out well, then the drone couriers could be put to work from next year. At hearing the news of their twin company, NetPincér decided to also start experimental tests.

Gábor Szórád, the manager of the company said that the option of drone delivery poses a lot of questions; however, they believe in the total automation of the delivery process in the long-run. An important step of this could be delivery by drones controlled by men, followed by the fully autoguided drone couriers.

“The preparation of the food usually takes up 15 minutes. The remaining 30-45 minutes of delivery are all about the logistic processes. This is what could be reduced to its half with the drones” said the manager. He also added that they are constantly looking for new, innovative delivery methods. “The 21st century is all about ‘now’. We are not willing to wait for long, we want everything immediately. When it comes to food delivery, rapidity is especially important since people usually order when they are already hungry, not one hour before.”

The manager emphasized that the current tests are only the first step in the process. “We were mainly prompted by honest curiosity. We have to solve a lot of legal and technical questions before seeing drones flying with pizzas over the cities. But we take the challenge seriously, we are negotiating with possible partners at the moment.”

Szilárd Fülöp, the manager of FlyBySense giving technical support for the experiment said that the drones most widespread in civic life are inadequate for food delivery. Their theoretic bearing capacity is only 0.2 kg and all grams are at the detriment of safety. Although, the bigger, more professional drones could safely deliver even 5-6 kg-s. 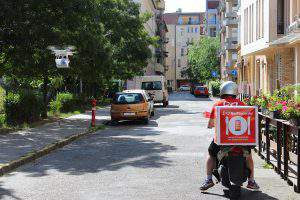 “The other bottleneck is the control of the drone. They can only be controlled for 400 metres with unaided eyes. But the bigger drones can be guided for 2-3 kilometres with the help of their camera.” He added that the real challenge are actually not the technical questions, but the difficult regulation. “Ideally you have to get permission to fly all drones since the current regulation declares that you can only fly an aerial vehicle without pilot in a separated air space. This is not too life-like.”

The law-makers realised the indefensibility of the situation. The Ministry of National Development is currently working on an order regulating the problem, which will probably be operative from the beginning of next year. Szilárd Fülöp thinks that drones are the future.

“We have to accept that drones will become a part of our everyday lives. In a few years’ time the sight of drones flying in the air at 100-150 metres can become as natural as the sight of cars on the streets. In fact, these will be flying without human control. If all goes well, the autoguided car will be presented in 2017. Why would drones need human contribution then?”