History Of The Iron Curtain Opening 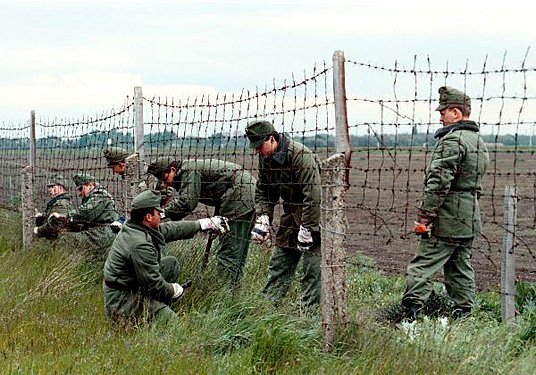 The removal of the Iron Curtain began on May 2, 1989, and also served as the lifting of barriers to the free movement of ideas and people.

The term ‘iron curtain’ was coined by British Prime Minister Winston Churchill. At first, Churchill only used the term privately, in telegrams he sent to U.S. President Harry S. Truman. He first used the term in public in a speech in Fulton on March 5, 1946. Originally merely a metaphor for Europe’s ideological divide, the Iron Curtain eventually became a physical entity, and remained standing for decades, achieving the goal of Stalin and his successors: the Eastern Bloc’s complete isolation from the rest of the continent.

The first barbed wire fences and minefields were installed in 1949. In Hungary, the Iron Curtain was installed along the Austrian border, in the form of a 356 km-long barbed wire fence, and along the 630 km Yugoslavian border on the south. The death of Stalin in 1953, and the subsequent easing of political tension between the East and the West led to officials declaring the Iron Curtain’s construction complete. As a result, in October 1955, the Hungarian government ordered the removal of the barbed wire fences, which was completed by the autumn 1956, giving hundreds of thousands of people the opportunity to flee the country after the 1956 failed revolution and freedom fight.

Following the defeat of the revolution, tensions with the West re-escalated. This time, however, the centre of conflict was on the Austrian border. In March of 1957 the government once again ordered the sealing off of the western border. The Iron Curtain became completed again on June 30, 1957. The new Iron Curtain consisted of 350 km of double barbed wire fences and a minefield of about 800,000 mines. With the fences deteriorating over time, the barriers were updated in 1963, and approximately one million new mines were installed.

The third phase of the Iron Curtain began when the Central Committee of the Hungarian Socialist Workers’ Party approved the use of the Soviet S-100 electric signal system (ESS), which began operating in 1971. This meant that the barbed wire fences and mines had to be removed permanently. The ESS introduced the low-voltage fence that alerted Border Guard troops of all potential border violations.

Domestic and international political changes in the 1980s raised questions regarding the cost and political efficiency of the ESS. Meanwhile, the Border Guard Command was reporting more and more ESS glitches and malfunctions. As a result, the Central Committee of the Hungarian Socialist Workers’ Party ordered the dismantling of the signal system.

The announcement of the dismantling was made at an international press conference on May 2, 1989 in Hegyeshalom.

On June 27, 1989, in what has become a historic event, Hungarian Foreign Minister Gyula Horn and his Austrian counterpart, Alois Mock opened the sealed border by symbolically cutting the barbed wire fence. The dismantling of the electric signal system was completed by December 31 of the same year.

During the dismantling of the Iron Curtain, day by day, more and more East German citizens were illegally making their way into Austria, and from there, into West Germany.

The process of the opening up of Hungary’s border was topped off by the so-called Pan-European Picnic on August 19. The picnic, a peace demonstration event with temporarily opening up the border, allowed 900 East German citizens to escape to Austria. From September 11 the Hungarian government granted GDR citizens still in Hungary permission to leave for any country that was willing to take them in. This allowed some 12,000 GDR citizens to cross the Austrian border and head for West Germany.

To commemorate the fall of the Iron Curtain, a memorial column was erected on August 24, 1991 on the road, known as no man’s land, connecting Hegyeshalom and Nickelsdorf. The trail of the Iron Curtain is now a tourist trail. The events of 1989 are commemorated annually, and to this day the German government continues to express its gratitude and recognize Hungary’s efforts.