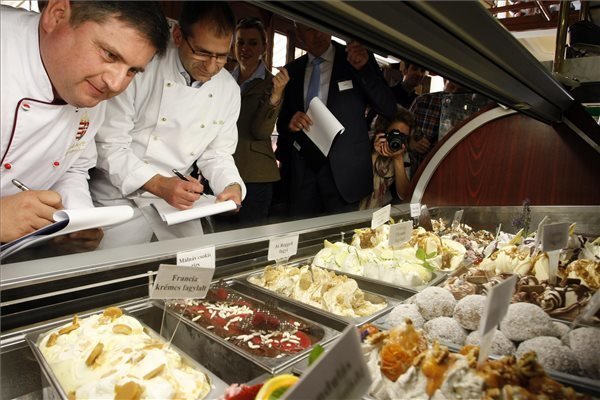 The honey and walnut flavoured „hecsedli ”ice-crem won the Best Ice-cream of the Year award in Soltvadkert. The winner ice-cream was chosen from 50 different ice-creams by the jury– délmagyar.hu reported.

The winner ice-cream speciality was created by Balázs Erdélyi, the co-owner of the Frer Confectionery in Budapest. This ice-cream combines the traditional and the new flavours harmoniously. Not only did the professional jury find it the best but the public as well. Thus the honey and walnut flavoured ice-cream received the prize in the category of Crafted Ice-cream and was also awarded with the Audience Prize.

János Pataki, the president of the Hungarian Confectioner Industry declared that all the 56 ice-creams of the 28 confectioneries were really creative and made a great job. The harmony of the design and the culinary experience of the ice-cream was the main aspect for choosing the best ones. János Pataki also noted that this year there were a lot of complex- flavoured ice-creams which were similar to the last year’s winner, the red wine-raspberry ice-cream.

Moreover, the Award of Merit was given to the A Cappella Cukrászda and Café of Szeged.

According to the delmagyar.hu, each participant had to cook a cottage cheese ice-cream with fruit dressing.

The president also mentioned that they were planning to organize a 3-day-long ice-cream festival in the Syma Centre in Budapest next spring. As part of the program, unique and craft ice-cream specialities will only be shown for the audience, while the Best Ice-cream of the Year Festival will remain a professional competition and festival.