If a foreigner could describe Hungary with one landscape, most of them would choose the Hortobágy – which is famous for its mirages, herds and the nine-hole Bridge. Due to the poems of Sándor Petőfi each child learns at the elementary school that the real Hungarian landscape is the “Alföld”, the Hortobágy. Thousands of tourists have been attracted to visit the sandy desert with its whip-popper Hungarian horsemen.

Interestingly, the Hortobágy has an area of 115 square kilometres only ranging from the “Hajdúság” to the river Tisza, so it isn’t really extensive. Moreover, its flora and wildlife are highly protected since the foundation of the first Hungarian National Park in 1973. The National Park has been declared as a biosphere reserve since 1979 by the United Nations because such animals and plants can be found here that cannot be found elsewhere.

The business value of Hortobágy was in livestock production in the past: the frequent flooding of the Tisza had a positive effect on the pastures creating lush grass until the mid-nineteenth century. Horses, cattle, sheep and pig were kept on the meadow but their number has decreased. The main reason for this is that the ground started to be sodic thus lost its yielding capacity. However, the Hungarian gray beef stock is still famous worldwide because it is unique and there are hundreds of animals in the Hungarian herd. 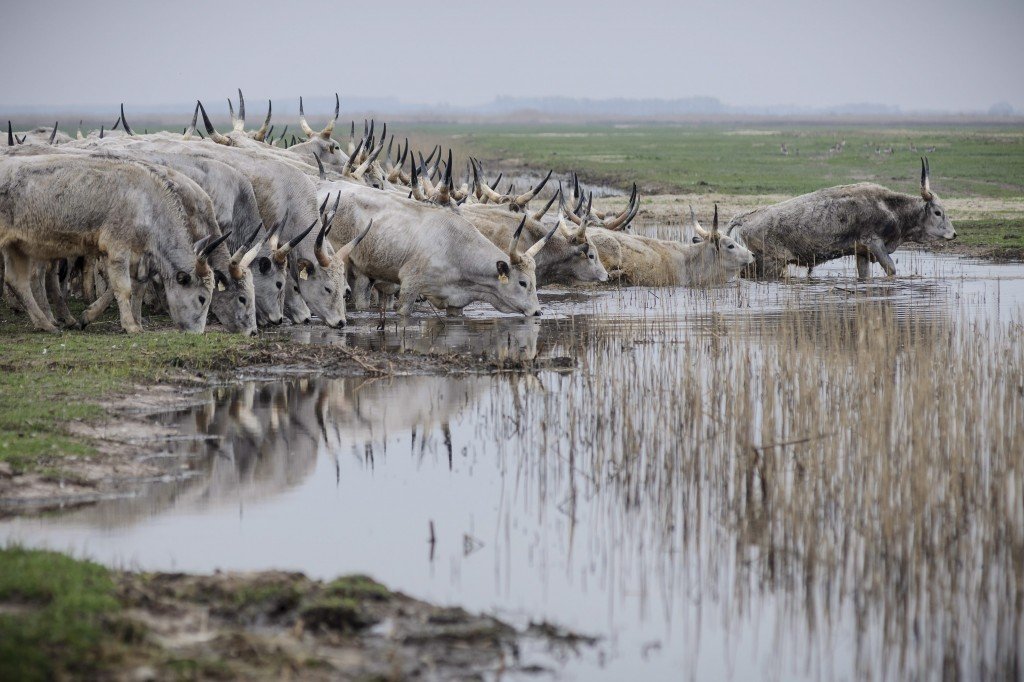 The best ways to get to this matchless province are tourist buses and cars using the road 33. Otherwise, if you prefer using train or shuttle buses, you can get tickets to the direction of Debrecen and Füzesabony cities, thus your destination will be a village called Hortobágy. Currently, the village is completely financed by its tourism. In the middle of the village there is a big inn called “Nagycsárda” which is the most valuable architectural monument of the 18th century of Hungarian hospitality. Moreover, there is a board which reminds visitors of that historical moment that once Sándor Petőfi also stayed in the Nagycsárda. Furthermore, some little museums and exhibition halls can be seen in this village which represent this landscape and its way of life with beautiful painting exhibitions and typical items of this territory. However, the real view of this landscape would be the best program. From this point you could see the famous nine-hole Bridge and the horse village (Lovasfalu). The nine-hole Bridge was designed by Ferenc Povolyn between 1827 and 1833.

The foundation of our state is not only celebrated in Budapest or Debrecen but in Hortobágy as well where big traditional events are held each August, 20th. The most celebrated attractions are still related to livestock breeding. Among the performances of the horsemen you could try horse riding if you feel like. The traditional event offers entertaining facilities for less active people as well: they could rent a chariot to walk around the Hungarian desert.

Besides horses, the other natural symbols of this region are the Hungarian grey cattle herds. According to experts, the Hungarian grey cattle is one of the oldest and noblest beef cattle. This type of animal could mostly preserve its ancestors’ properties: the muscular and robust body and the elegant, wild beauty. Probably, it is not so well-known that the “kuvasz”, “komondor” and “puli”, the special Hungarian breed of livestock guardian dogs also have Hungarian origin. Moreover, Hortobágy is also known for its birdlife: spoonbill, Eurasian Bittern and aigrette can be observed in the reeds. In spring times storks are coming while in winter times white-tailed eagles, buzzards and hawks can be seen in this landscape. Last but not least, you can also taste the special Hungarian cuisine like the Debrecen stuffed cabbage rolls, Hortobágy roast beef or the “Alföld lebbencs” soup and many other specialities.