Turizmusonline.hu writes that the editors of Lonely Planet have put together their list of destinations they recommend visiting in 2017. They have separate lists for the top countries, top cities, top regions and top value destinations. We were thrilled to read that the Hungarian city of Debrecen is listed on the latter list!

What’s quite interesting is that there’s only one European state on the top list of countries. They even left out Iceland, which was a global hit destination in the past years. However, we have every right to be proud, because Debrecen is listed in the illustrious 5th place on the Top 10 Value list. 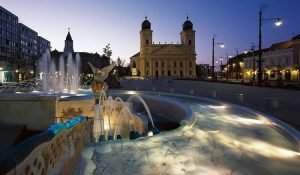 “Hiding in plain sight beyond Budapest is Debrecen, the country’s second-largest city and the heart of low-cost Hungary. Now connected by Europe’s budget-airline network to seven countries, the city is opening up to international visitors. Debrecen is rich in history, but more modern influences have prompted a growing modern-art scene and streets that come alive with summer festivals. What really sets Debrecen apart is its location on the edge of Hungary’s puszta (eastern plains). The haunt of Hungarian cowboys and home to Hortobágy National Park, the region still dominates romantic visions of traditional Hungary” writes Lonely Planet in their description about Debrecen.