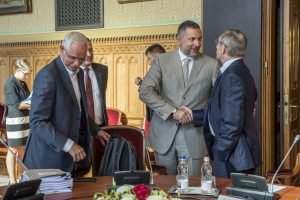 The meeting was attended by the ministers overseeing the areas discussed that include interior affairs, national development, agriculture, economy and human resources, the office said in a statement.

The strategic cabinet is headed by János Lázár, the head of the prime minister’s office who announced changes to the government structure in early July.

It has as its permanent member the justice minister and the economy minister.

Under the new structure an economic cabinet has also been set up, headed by Mihály Varga, the economy minister.

Lázár said in mid-July that the new government structure would help strengthen decision-making and strategic planning. He said the changes will create a forum which acts as a buffer zone between the ministries and the government where disputes can be resolved. The new economic cabinet will examine the budgetary implications of a proposal and the strategic one will see if it is in line with the government’s goals, he told weekly Figyelő.

Budapest economy European Union Fidesz Government History Hungary migration Ministry of Foreign Affairs tourism Viktor Orbán
Would you like to prepare the best Hungarian doughnut for this year’s carnival? If…
Foxes and wild boars no longer surprise the citizens of the South-Hungarian city,…
The government aims to put a stop to the "prison business" which has grown into a…
Confronting the fates of the survivors of the forced labour camp in Recsk, in…
We and our partners use technologies, such as cookies, and collect browsing data to give you the best online experience and to personalise the content and advertising shown to you. I accept
Privacy & Cookies Policy