Hungarians do not care about corruption

Eurobarometer published for international anti-corruption day its latest public opinion survey regarding people’s thinking about corruption in EU member states. According to findings, Hungarians have a tragic view towards corruption. Hvg.hu’s summary of the results.

86% of Hungarians are aware of the corruption

To start with, December 9th is international Anti-corruption Day. The results of Eurobarometer’s latest survey regarding corruption are downloadable HERE. However, Hvg.hu highlighted three key figures representing how Hungarians think about corruption in their own country. In fact, Eurobarometer conducted the survey in October so results are quite fresh.

Firstly, Hungarians are aware of the fact that corruption is a problem in the country. According to the results, 86% of the people see this clearly. However, this rate was not enough to be able to get in the top 5. For example,

Greeks or Spaniards consider state of corruption in their countries much worse than Hungarians in their own.

Interestingly, fewer Romanians or Slovaks think that corruption is widespread in their countries than Hungarians. Clearly, Finland is the leader on the other end of the list together with other Northern-European countries. 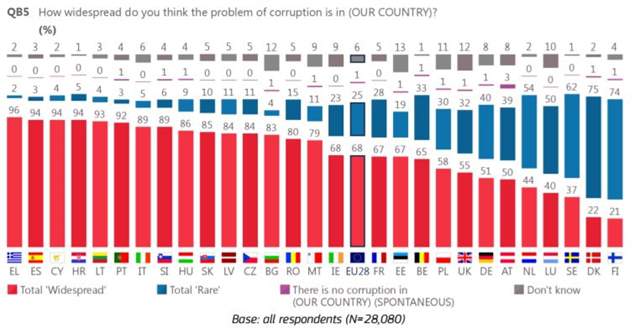 Hungarians got used to corruption

Secondly, taking part in a corruption scheme does not trouble Hungarians. For example, respondents were asked how acceptable they thought it was to give money, gifts or to do a favour if they wanted to get something from the public administration or a public service. Clearly, only 35% of Hungarians regards this unacceptable. To make matters worse, only Latvians produced a lower rate in this question. 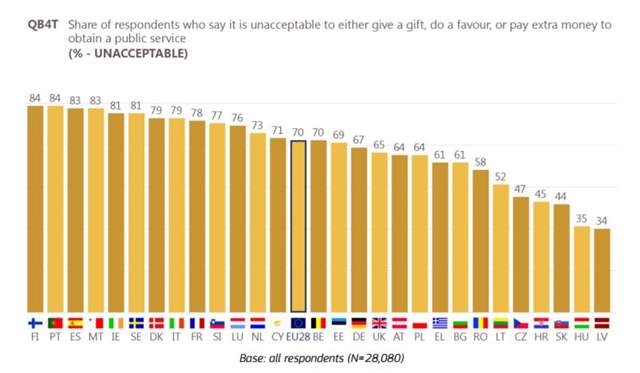 Finally, the majority of the Hungarians believe that the level of corruption has grown in their country in the last three years. According to the results, 58% agreed with this statement, and only 4% denied it. Therefore, Hungary obtained the third place on the imaginable podium in corruption level increase. 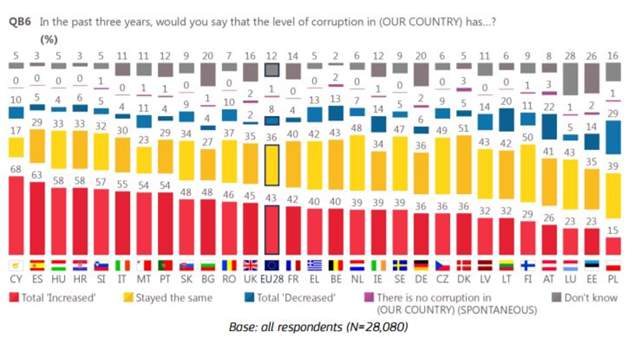 Thus, it is not surprising that biggest Hungarian opposition party

Jobbik would start its governance with establishing an Anti-corruption agency.

Jobbik maintains the view that corruption has reached the highest levels of the political sphere. Thus, the opposition party proposes to pass double sentences for crimes related to public monies and/or committed by public officials. However, their bills have been so far rejected by the governing parties.

In addition, Jobbik would like to eliminate any statutes of limitations for such crimes, because now it is impossible to hold public officials accountable for crimes committed two government terms before. Furthermore, Jobbik maintains its earlier proposals regarding mandatory confiscation of politicians’ property if they cannot prove its legal origins as well as to amend the wealth gain reporting system so that politicians’ relatives would also have to submit their wealth gain report, an act which Jobbik’s MPs have already done voluntarily.