(MTI) – The Hungarian delegation in Beijing seeks to consolidate and intensify ties with China, Prime Minister Viktor Orban said before talks with his Chinese counterpart Li Keqiang on Wednesday.

The Chinese premier highlighted long-standing friendship between the two nations. Li said that Orban was the first foreign premier to visit his country after the Chinese New Year, signalling close relationship between the two nations. He noted that the two countries had established diplomatic relations 65 years ago. Li expressed hope that the visit would give a boost to bilateral ties.

Orban said that Hungary highly appreciated China’s recent achievements, and called it a privilege for the Hungarian delegation to be the first to be hosted in Beijing after the New Year holidays.

Orban noted that Li Keqiang had already visited Budapest, as deputy premier at that time, and that they had had talks at the Bucharest China-CEE summit last year.

After the hour-long meeting, several bilateral agreements were signed in the presence of the two premiers. Hungarian Academy of Sciences president Jozsef Palinkas signed an agreement with the heads of China’s Academy of Sciences and the Chinese Academy of Social Sciences. Deputy economy ministry state secretary in charge of tourism Viktoria Horvath signed a cooperation memorandum on setting up a joint tourism promotion organisation with the Chinese State Tourism Office.

A letter of intent was signed on cooperation in connection with using Chinese traditional medicine, a memorandum on expert exchange was signed by the head of the National Office of Innovation, and Eximbank deputy director Tamas Darabos signed an agreement on export insurance.

After the meeting and the signing ceremony, Li Keqiang gave a dinner reception in Orban’s honour. 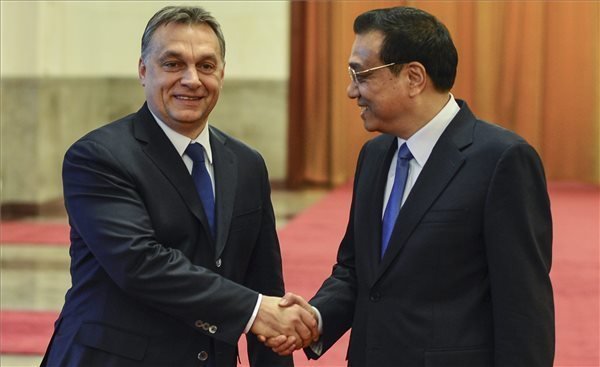 Li also called on Hungary to play a constructive role in the implementation of the China-EU 2020 Strategic Agenda for Cooperation and a guideline for cooperation between China and CEE countries, the agency said.