IWIW, The Hungarian Social Network Closes After 12 Years Of Success

IWIW, the Hungarian social network was founded in April, 2002 and was the most popular Hungarian website between 2005 and 2010. IWIW is an English acronym which comes from the “International who is who” phrase. Unfortunately, the website ceases to exist on 30th of June this year – Origo.hu reported.

The last server of the Hungarian social network will be switched off at the end of next month because it hasn’t been widely used nowadays due to its competitors. IWIW belongs to the Magyar Telekom Plc and the operator of the system is the Origo Media and Communications Services Ltd. According to the company, IWIW could achieve profits last year but they did not manage to keep it by 2014, thus the website closes after a 12-year-long success.

Interestingly, IWIW.hu was founded by the idea of Zsolt Várady, web developer. It has been the first community website aiming to map the connections between friends. At the beginning, a new member could join the site only by the invitation letter of an IWIW member. Later a registration form was adopted because the number of members of the site had increased rapidly. In 2005 the system was renewed: the site became multi-lingual and introduced a lot of new features. At the peak of the success IWIW had 4.7 millions of members and about 1.5 million of users logged in daily. By the end of 2010, the same number of people had logged into IWIW and Facebook every day, but then the number of Facebook members started to increase because it was better financed. As it was mentioned above, to become a member of the IWIW you had to receive an invitation from an IWIW user. Thus, being online on IWIW seemed cooler and even more popular than Facebook membership in the first years. 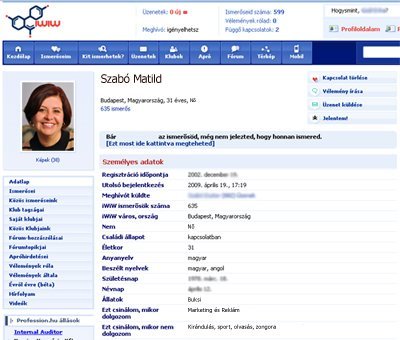 According to the IWIW statistics, only 10% of their members deleted their account to start using Facebook while the majority is not active or rarely use the IWIW since the Facebook has become more popular. The statistics also showed that in the last years the Hungarian social network was popular among middle-aged and elder people who live in the countryside.

Furthermore, the site operators also noted that one of the reasons for losing so many members was that they could not see the opportunity of the embedded applications soon enough. Moreover, the news feed of the IWIW was also started too late.

As the Origo.hu website reported, none of the IWIW members has to worry about losing their good memories and activities: after logging in the site anyone can save his/her own profile by pushing a button before the website closes forever. Currently, there is an interesting phenomenon on IWIW, namely the time capsule which can be activated by each member before 25th June. The time capsule means that all the messages, pictures and IWIW contacts will be downloaded in one .zip file. Moreover, all the details of our IWIW contacts will also be saved in a special .csv file, thus it can be imported and reused in an Excel board. The system will send an e-mail after the time capsule procedure will have been finished and we will be able to download it to our computer. If you delete your account before the final closing, your activity and personal details will not be included in the time capsule of your friends.

To sum it up, the final countdown has already started: all the users’ data of the IWIW website will be deleted on 30th of June, 2014.

based on articles of origo.hu(1)(2) and Wikipedia
by Valentina Leanyfalvi