Sometimes referred to as ‘mop dogs,’ the Komondor is a long-established powerful dog breed that has a natural guardian instinct to guard livestock and other property. The Komondor was brought to Europe by the Cumans and it was mentioned for the first time in 1544 in a Hungarian codex. The Komondor breed has been declared one of Hungary’s national treasures, to be preserved and protected from modification.

The name Komondor derives from Koman-dor, meaning “Cuman dog”. The breed descends from Tibetan dogs and came from Asia with the Cumans, whose homeland was near the Yellow River. In the late 900s, Mongols began to expand their territories at the expense of the Cumans, forcing them to move westwards. Fleeing from the Mongols, they reached the borders of Hungary in the 1100s. Cumans were granted asylum and settled in Hungary in 1239 under Köten Khan. Komondor remains have been found in Cuman gravesites.

The Komondor is a large dog (many are over 30 inches tall), making this one of the largest common breeds of dog, or a molosser. The body is covered by a heavy, matted, corded coat. The dogs have robust bodies, strongly muscled, with long legs and a short back, with the tails carried low. The body, seen sideways, forms a prone rectangle. The length of body is slightly longer than the height at the withers, approximately 104% of the height at withers.

The Komondor has a broad head with the muzzle slightly shorter than half of the length of the head, with an even and complete scissor bite. Nose and lips are always black. People unfamiliar with the breed are often surprised by how quick and agile the dogs are.
The minimum height of female Komondors is 25.5 inches (65 cm) at the withers, with an average height of 27.5 inches (70 cm). The minimum height of male Komondors is 27.5 inches (70 cm) with an average height of 31.5 inches (80 cm). No upper height limit is given. Komondor females on average weigh between 88–110 lb (40–50 kg) and Komondor males weigh on average between 110–132 lb (50–60 kg). 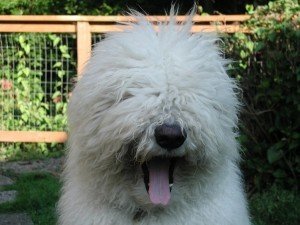 The Komondor’s coat is long, thick, and strikingly corded white coat, about 20 – 27 cm long (the heaviest amount of fur in the canine world), which resembles dreadlocks or a mop. The puppy coat is soft and fluffy. However, the coat is wavy and tends to curl as the puppy matures. A fully mature coat is formed naturally from the soft undercoat and the coarser outer coat combining to form tassels, or cords and will take around two years to form. Some help is needed in separating the cords so the dog does not turn into one large matted mess. The length of the cords increases with time as the coat grows. Shedding is minimal with this breed, contrary to what one might think (once cords are fully formed). The only substantial shedding occurs as a puppy before the dreadlocks fully form. The Komondor is born with only a white coat, unlike the similar-looking Puli, which can be white, black, or sometimes grayish. However, a working Komondor’s coat may be discolored by the elements, and may appear off-white if not washed regularly. Traditionally the coat protected the Komondor from wolves’ bites, as the bites were not able to penetrate the thick coat. The coat of the Komondor takes about two and a half days to dry after a bath.

The Komondor’s temperament is like that of most livestock guarding dogs; it is calm and steady when things are normal, but in case of trouble, the dog will fearlessly defend its charges. It was bred to think and act independently and make decisions on its own.