LMP criticises gold mine project at meeting with Romanian ambassador 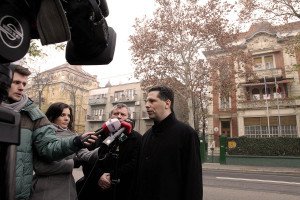 MTI – The opposition LMP party expressed its criticism of the Rosia Montana gold mine project, which involves a cyanide technology, and the cutting down of trees at Reci in central Romania at a meeting on Wednesday with the Romanian ambassador in Budapest.

LMP co-chair and group leader Andras Schiffer and party lawmaker Lajos Mile told Alexandru Victor Micula that the party wants to see a ban on cyanide technology throughout the European Union and it is harmful when economic and employment policy interests are set against environmental considerations.

On the issue of Szekler autonomy, Micula said decentralisation measures in Romania aimed to enforce local decision-making but the LMP politicians said the strengthening of local councils was not equal to granting autonomy.