Lufthansa Technik’s new aircraft engineering centre where fifty highly qualified engineers will work has been inaugurated in Budapest. At the event Péter Szijjártó stressed that the world’s industry and economy are entering a new era in which high technology, the automation of transport and digitisation will dominate.

The Minister of Foreign Affairs and Trade added that the Lufthansa Group is one of the flagships of this new era which is world number one in its own industry. He also remarked that those States may take the lead during the new era which enter into good partnerships with these flagship businesses, and those countries may become successful which closely cooperate with the aviation industry.

The new Budapest centre was created as a German investment. The workers of the facility will perform engineering, technical diagnostic and maintenance work related to the Boeing 737 model, and will analyse and monitor the data received from the engines.

Thomas Stüger, member of the Board of Directors of Lufthansa Technik stressed that the so-called MRO segment concerned with aircraft maintenance is continuously expanding, and he described the move to have brought one of the support areas to Hungary as a pioneering step. 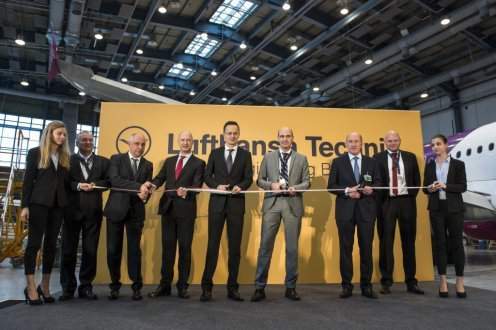 Jost Lammers, CEO of Budapest Airport highlighted that Lufthansa Technik has been in Budapest for 15 years, and has during this time become a reliable partner of Hungary, the airport and Hungarian aviation.

He said: he is convinced that Lufthansa made the best possible decision because Hungary is the engine of the region’s economic growth.

Attila Ughy, Mayor of the 18th district reiterated that the idea first emerged in 2014 that the MRO segment should be extended in Budapest, and in just two years they reached full completion.