MOL BUBI TO BE LAUNCHED ON MONDAY

MOL Bubi, the public bike-sharing system that is a new mode of public transport in Budapest will be launched on Monday, 8 September 2014. Tickets will be available for purchase from Monday morning at the touch-screen terminals of major docking-stations and the MOL Bubi website, while passes go on sale at BKK’s customer service centres. Registration for purchasing passes is now open at molbubi.bkk.hu. To avoid queues at the customer centres, individual appointments are offered on the website. The implementation of the system comprising 76 stations and 1,100 sturdy, apple-green bikes was co-funded by the European Union in the amount of 900 million Hungarian Forints. Several promotional discounts are offered from day one to those wishing to try MOL Bubi.

As the public test-period is over, the MOL Bubi bike-sharing system will go live for the public on Monday, 8 September 2014. The MOL Bubi docking stations and green bikes are already familiar to many since more than 2,000 volunteer testers have been using them on the streets of Budapest for weeks with a record of 3,200 test hires on a single day. The Municipality of Budapest commissioned BKK Centre for Budapest Transport to develop the scheme.

During the public test-phase, registered testers have tried out the robust bikes specially designed for urban cycling along with all the functionalities of the system and provided relevant feedback on their experience. In addition to volunteer testers, development and operations experts by BKK and system supplier and future operator T-Systems Magyarország and Közbringa Kft have also been using the service to make sure that a fully operational system can be handed over to the public. The official launch has been delayed due to several minor errors which have since been corrected to ensure a smooth system go-live.

Based on the analysis of the comments received from more than 2,000 testers, the majority of the inconveniences and errors reported during the test phase have been remedied on an ongoing basis by Közbringa Kft. Most testers have found the green bikes to be comfortable to ride and they also thought the system is easy to use with the MOL Bubi cards. Some minor developments to raise user comfort will still be carried out on the bikes by BKK in the next few weeks; this will however not prevent the launching of the system. Such a development measure is, for example, the replacement of the tyres with a lighter design for easier pedalling, which however does not mean that the current tyres are faulty.

The public test reached its goal: the daily average of reported errors was 1-2% initially, but this level significantly decreased later on thanks to continuous checks and repairs. Testers typically invited their friends or family for a ride in the city as up to four bikes can be hired with one MOL Bubi pass.

In the framework of the public procurement agreement concluded with BKK, system integration entailing data communication and special software solutions is carried out by T-Systems Magyarország Zrt while major system elements are supplied by Nextbike GmbH of Germany, the developer of similar systems in numerous other metropolises. Bicycles are assembled by Csepel Zrt. of Hungary. The namesake sponsor of the system is MOL based on its agreement with BKK, which also involves a significant annual contribution of 100 million Forints towards operations. MOL’s objective is to foster environmentally friendly mobility and to popularise cycling.

The MOL Bubi Start pass is valid until the end of the year (31 December 2014). The pass is available at the price of 3,000 Forints and comes with a bonus credit of 1,500 Forints for usage fees. Practical for customers who would like to get to know this new system.

Customers in possession of an annual BKK public transport pass are entitled to a permanent discount of 50% off the price of the annual MOL Bubi pass. Pupils and students in possession of a public transport semester pass at the time of purchase are entitled to a 20% discount off the price of the semi-annual MOL Bubi pass. During the promotional launch period, the 50% and 20% discounts apply to the reduced annual and semi-annual pass prices.

The passes mentioned above will be on sale at BKK customer service centres at Deák Ferenc tér M, Kelenföld vasútállomás M and Keleti pályaudvar M metro station underpasses and at BKK’s central customer service office in Rumbach Sebestyén utca). Registration for individual appointments to purchase passes at the customer centres so as to avoid queues is highly recommended and is now open at molbubi.bkk.hu.

When purchasing passes (MOL Bubi Start pass, annual or semi-annual pass), the signing in person of an agreement is required. Customers receive a MOL Bubi card which allows for the hire of four bikes at one time without the need of a deposit. Each pass comes with a bonus credit that is to be used towards fees for system usage that goes beyond the 30-minute free period.

Casual users have the options of buying 24-hour, 72-hour or 168-hour (weekly) tickets. As a promotional discount, from the time of launch until 22 September 2014, tickets are sold for 100 Forints on the MOL Bubi website or at touchscreen terminals. At 31 touchscreen terminals marked red on the website map, bankcards are accepted for payment without the need for prior registration or the signing of a contract. Customers are advised to check BKK’s website for more information beforehand.

For ticket prices valid from 23 September 2014 and for fees for the usage beyond the 30-minute free period (which equally apply to ticket and pass users), please visit the molbubi.bkk.hu website.

Passes are sold and contracts are signed at BKK customer service centres at Deák Ferenc tér M, Kelenföld vasútállomás M and Keleti pályaudvar M metro station underpasses and at BKK’s central customer service office on the corner of Rumbach Sebestyén utca and Király utca). Registration for individual appointments to purchase passes at the customer centres so as to avoid queues is highly recommended and is open from 19:00 on 5 September at molbubi.bkk.hu. The signing of contracts and access to the MOL Bubi bikes is possible from Monday morning on 8 September 2014. When registering, customers need to provide their personal data and also have the option to book an appointment with customer services. Following the presentation of their personal identification documents and the signing of the contract at the selected BKK customer service office, new MOL Bubi customers receive their MOL Bubi passes and are free to use a bike from the nearest docking station.

Information on how to use MOL Bubi

During the validity period of tickets and passes (which ranges from 24 hours to a year depending on the type), access to the system is unlimited with a period of free use for up to 30 minutes per hire.

Usage fees apply for more than 30 minutes of continuous cycling. With gradually increasing usage fees from the 30th minute, users are encouraged to return their bikes after their trips, so that more and more users can get access to them. For fares please check the molbubi.bkk.hu page.

Pass holders with a MOL Bubi card are entitled to hire up to four bikes at a time without a deposit. 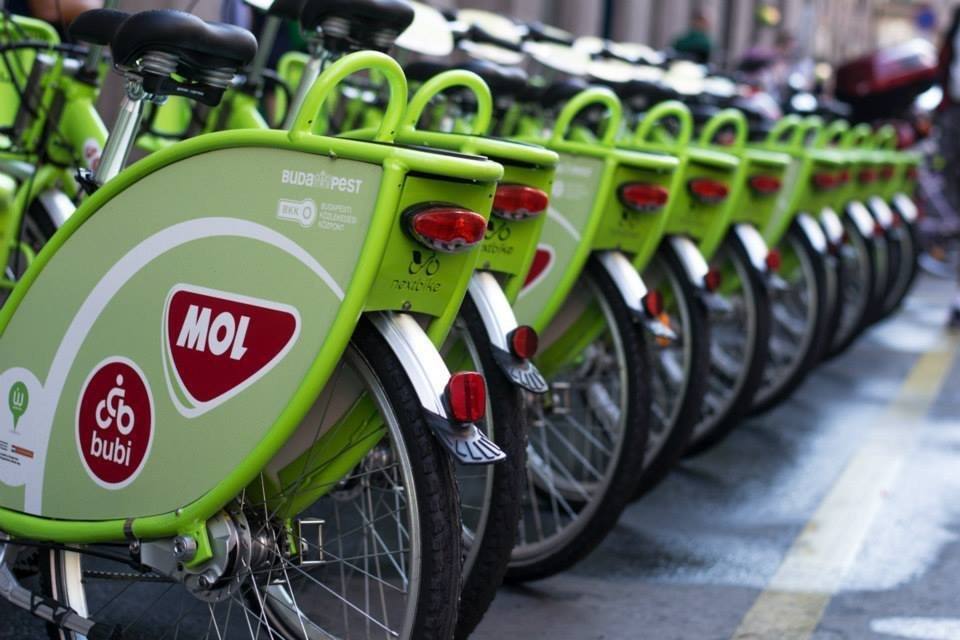 Ticket holders can also hire four bikes, but each individual bike requires a deposit of 25,000 Ft, which will be blocked on the customer’s bankcard and released after ticket validity after the deduction of usage fees.

After the return of a bicycle, a new bike can be hired only after 10 minutes with the same MOL Bubi card.

From Monday 1,100 apple-green bikes can be hired from 76 docking stations around the clock in all seasons. Docking stations are located 300-500 metres from each other in an area surrounded by the Grand Boulevard and City Park (Városliget) in Pest while in Buda stations are positioned in Víziváros, the university quarter in South Buda and on Margitsziget. The robust bikes have been uniquely designed for urban cycling with special durable parts that are not compatible with other types of bicycles, so that it makes no sense to steal them.

As a result of the joint development by the consortium MOL Bubi features innovative solutions like the solar-powered stations or the large-size touchscreen terminals. Közbringa Kft is commissioned by BKK to operate the system. Docking stations are monitored on an ongoing basis to ensure that sufficient numbers of bikes and free docking points are available according to demand.

MOL Bubi Customers and anyone interested can contact BKK’s 0-24 call centre for support at +36 1 3 255 255. Additionally, in the first few days after system launch, new MOL Bubi customers will be assisted by BKK’s MOL Bubi Ambassadors positioned at each and every docking station between early mornings and late evenings.

The EU co-funded development is worth more than one billion Hungarian Forints. Funding for the “Development of the Budapest Public Bicycle-Sharing System” project was provided by EU Regional Development Fund in the framework of Széchenyi 2020. Total project cost is net 1.059 billion Forints including 900 million Ft co-funding by the EU and the own contribution was provided by the Municipality of Budapest to BKK. The main sponsor of the operation of the system is MOL, additionally revenue from user ticket and pass sales and financial support by the Municipality of Budapest ensure the sustainability of the system.