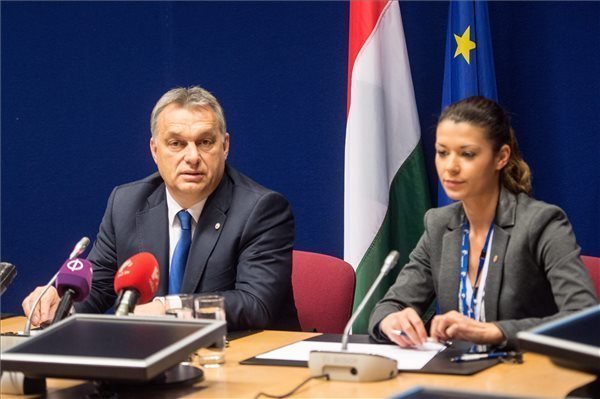 Brussels, December 18 (MTI) – The heads of state and government of European Union countries were open to UK reform proposals at a summit in Brussels on Friday, Prime Minister Viktor Orban said, adding however that the proposal that could end up restricting the free movement of EU citizens in the bloc was unacceptable.

Speaking on the closing day of the summit, the Hungarian prime minister said that the odds of the success of three of the four British government’s proposals were relatively high, and in the case of the fourth there were parts of the proposal that could provide a basis for further negotiations.

Compared to previous expectations, the debate on issues related to the British demands was held amid a constructive atmosphere, Orban said.

The EU’s four basic freedoms regarding the movement of people, capital, goods and services must not be restricted, he added.

On the sidelines of the summit, Orban talked with British Prime Minister David Cameron. He told reporters afterwards that Cameron is scheduled to visit Budapest on Jan. 7.

At his press conference, Orban said that participants in the summit fully agreed that border control is a national competency, but if a member fails to meet that obligation the other members should have the right to jointly control the bloc’s external borders.

Orban said that the Schengen regime could not work unless those borders are protected. Control of Greece’s southern borders has not been successful, he said, adding that it was important to set up a “secondary line of protection” along Greece’s borders with Macedonia and Bulgaria.

The prime minister said that the EU should recognise and support regional cooperation such as the Visegrad Group and Hungary’s joint efforts to contain the migrant crisis together with Serbia, Macedonia and Slovenia.

He also said an important threshold had been crossed at the European summit ,since this was the first at which the issue of protecting the external border had been the central focus of the meeting.

On Thursday, the government instructed its ministries to cancel their mobile internet contracts with Magyar Telekom which objected the singer’s comments in a television interview in which he said: “The role of women is to belong to someone, give birth [and] be mothers”.

The government’s response is only symbolic, as mobile internet contracts account for just 0.1% of MT’s revenue, the cabinet chief, Antal Rogan said earlier today. “MT will not lose too much money as a result,” he added.

Answering a question at his press conference in Brussels, Orban said the case was about the freedom of expression. It is a government obligation to ensure that parties have an opportunity to put their opinion forward even if others may disagree.

“The question is whether an international company can punish someone because it does not like that person’s views,” Orban said. He noted that Magyar Telekom is a government strategic partner and “it must respect values that are protected by the Hungarian constitution”.