In Budapest, in his opening speech at the 6th Annual Forum of the EU Strategy for the Danube Region, Prime Minister Viktor Orbán said that the Hungarian people want Europe’s external borders to be closed, while its internal borders remain open.

He said that those living in the region are aware of the geostrategic significance of the Danube Valley, as “those seeking to occupy a place in Europe have always come along this route, and Hungary has been the last line of defence […] for the West”. He added that today, also, there is a concept – “a campaign implemented in a planned fashion” – which aims to create mixed societies in Europe. This plan would see the peoples of the Danube Valley losing the most, he said, but “we shall not let it happen, because we shall resist it and defend ourselves”.

The Prime Minister argued as follows:

We know how these things work: first they test the strength of our borders, then they channel new population groups into Europe, en masse. This is followed by conflicts, and the next thing we know is that the newcomers are the majority, and eventually organising their own parallel state administration.”

He added that he has faith in the Schengen system recovering in the near future “from its current comatose state”, as the greatest attraction of the EU is freedom of movement across its territory.

Mr. Orbán also stressed that, compared with 2010, movement in the Danube Valley region has increased by 300 million tonnes of goods and 300 million people, and this necessitates further investment. This is why a new bridge across the Danube at Esztergom was inaugurated in 2001, he said, and this is why on Tuesday, together with Slovak prime minister Robert Fico, he laid the foundation stone of a new bridge over the Danube at Komárom. 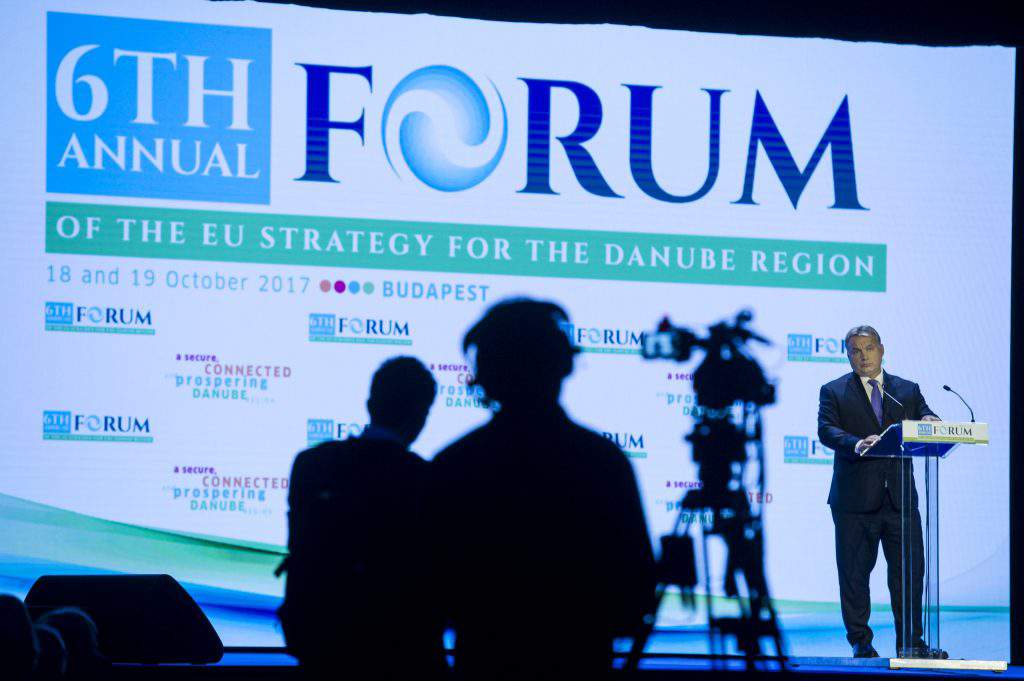 He pointed out that

between 2014 and 2020 the Danube Transnational Programme is making available a total of EUR 277 million,

but a great deal more money is required. He therefore urged the European Union and the countries concerned to increase their contributions to the fund.

According to the Prime Minister,

At present, also, he said, the countries of the Danube Valley region constitute a smoothly operating economic and cultural unit – as they have done over the past few centuries. He stressed that “our fate is shared, our responsibility is shared, our challenges are shared, and so are the threats that we all face”.

Cooperation also symbolises the fact that

“Our home is Central Europe, extending from the Black Forest all the way to the Black Sea”,

Mr. Orbán said, and furthermore, in a wider sense it may even include the territories of the Carpathian Mountains. He believes that one can state that the territory occupied by the peoples of the Danube Valley is one of the European Union’s most dynamically developing and most promising regions. Since 2012 this region has had the fastest growth in the whole of Europe, he observed, but it still has enormous potential, which is as yet unexplored.

The Prime Minister said that we must prevent industrial disasters that threaten rivers, and we must also take measures against flooding. In the context of the latter, he noted that after the Danube floods of 2013 a survey conducted by Hungarian experts led to a comprehensive flood control action programme for the Danube’s entire catchment area.