Orbán writes message of condolence at US embassy

Prime Minister Viktor Orbán wrote a message of condolence in a book opened for President George H.W. Bush at the US embassy in Budapest on Thursday afternoon, Bertalan Havasi, the PM’s press chief, told MTI.

Orbán was welcomed at the embassy gate by David Cornstein, the US ambassador. After expressing his condolences, Orbán and Cornstein held talks, Havasi said. 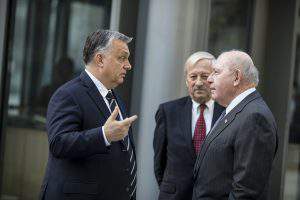 The Hungarian nation will always be grateful to President Bush

On Monday Prime Minister Viktor Orbán has sent a letter of condolence to the bereaved family of the late George H. W. Bush.

“It is with deep sorrow that we have heard that George Herbert Walker Bush, an outstanding American patriot and a friend of Hungary, has left us. Please accept my deepest personal condolences and those of the whole Hungarian nation”, the Prime Minister wrote.

“The Hungarians will always remember him and be grateful for everything that President Bush did for the dismantling of the Iron Curtain, and to free Hungary and Central Europe from Soviet oppression.”

“His visit to Hungary in 1989 gave us hope and encouragement at a critical moment”, Mr. Orbán wrote, adding that “We will never forget his noble and firm determination to ensure historic changes in our region”.

In closing the Prime Minister wrote,

“Our thoughts and prayers are with the Bush family at this difficult time”.

President János Áder has sent condolences over the death of former US President George H.W. Bush to his US counterpart Donald Trump, Áder’s office said on Saturday.