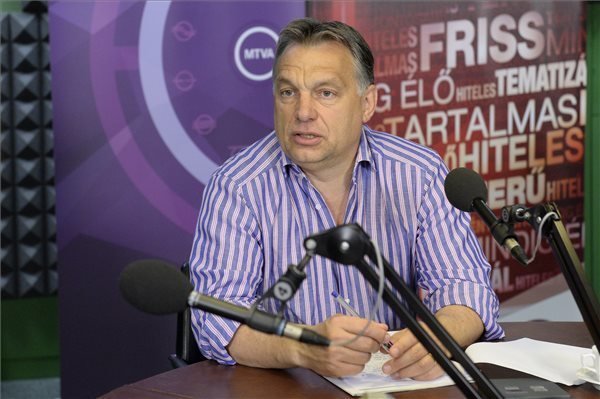 Budapest, June 13 (MTI) – Prime Minister Viktor Orban said on Friday that he wanted to see the personal income tax reduced from the current 16 percent to below 10 percent by 2018, the end of the current governing cycle.

To attain this goal, the economy should grow instead of the current 2-4 percent by 4 to 6 percent, Orban told public Kossuth radio, adding that the latter rate is also feasible.

He said that as long as Fidesz stays in power, the sectoral taxes would remain in place.

“Our position is that those that generate extra high earnings should take a greater share in public burden,” he said.

Concerning the introduction of the ad tax, he said that the advertisement sector must also take its share of public burden and this is not a matter of constraint but a matter fairness.

Consultation talks have been carried out and calculations shows that “we will collect 9-10 billion forints from a sector that is large and works with huge profits,” he added.

The ad tax will be a sectoral tax that already exists in other sectors, he said. Commenting on objections from the media, he said “the bankers had also done it, bankers on the right and on the left were protesting on the same platform” since “nobody likes paying tax,” especially not if they have high earnings, Orban said.

After the introduction of the banking levy, “bankers said it would put a freeze on crediting (…) and the banks would withdraw. Yet, I can see the bank sector operating well in Hungary,” he said.

Orban confirmed his commitment to creating full employment in Hungary, adding that the government would offer more public work opportunities in the coming period.

“Instead of compensating people for not having work, we want to create work opportunities to them.”

Concerning the ongoing transformation of the municipal election system of Budapest, he said parliament should pass a law in the current cycle to stabilise the operation of the city for decades.

Under the ruling Fidesz-proposed law, Budapest’s 33-seat city council would include the mayor of Budapest, 23 district mayors and nine other members to be elected from among mayoral candidates who fail to win seats in the election.

Orban said this will force the district mayors to cooperate with the Budapest mayor. Under the current circumstances, this is the best option for the city, he added.

Asked about Tarlos’s possible re-nomination for the post, Orban said that “we can recommend him in good faith so that the work done over the past four years should continue.”

Addressing European affairs, Orban said that the European Union is witnessing a process of “legislation by stealth”, with its Treaty being amended step by step, through the modification of details.

Orban mentioned as an example the endeavour that the leader of the European Commission should be selected from the candidates of parties represented in the European Union and nominated automatically by the prime ministers of the member states.

This is an effort “to amend the European constitution by stealth”, he said.

Orban said he expected repeated attempts in Brussels to curb the powers of member states, ones “which we have to prevent by bringing up constitutional arguments.”

The prime minister said he would soon leave for Portugal to attend a European People’s Party summit.

In the next phase, an EC president prepared to implement this programme should be elected, Orban said.