There is an unmatched collection in one of the family houses of Esztergom. The collector has been collecting the uniforms, caps, badges and insignias of the law enforcement organisations for 25 years. He succeeded in collecting police symbols from 127 countries so far. Each object has its own story. There is an item that was sent by the Jordanian king’s family to Dr. Szilas, in a decorated box, with courier. He was also appointed honourable police or sheriff in a number of countries as an acknowledgement of his work. His great dream is to finally open his own museum. We talked with Dr. László Szilas collector. 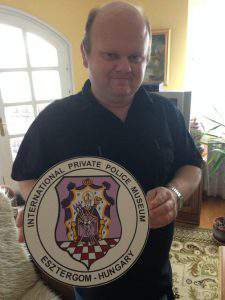 – The following question was probably often asked from you, but I am also curious. What is the origin of your passion of collecting police uniforms?
– It is true that they frequently ask this question, and I always answered the same. I never understood people, when they scolded the policemen in general. There are black sheep in each profession. People, who do not belong there. However, they usually do not scold the people of other professions in a generalizing manner. They name the individual with whom they have some problems. I do not understand, why this practice cannot be followed in the case of the policemen? Why do they have to scold all of them? People, who, in certain cases, do even sacrifice their own lives in order to protect us, do not deserve this. Therefore, the passion for collecting police relics on my side is the expression of respect towards them.

– When did you start collecting?
– 25 years ago. First, I contacted five European countries and I was awaiting curiously for reactions. I received a letter from the Danish Royal police straight away, in which they asked in what language I would like to have the information, but soon others also answered. Thus, this was the way my collector career started about a quarter century earlier. 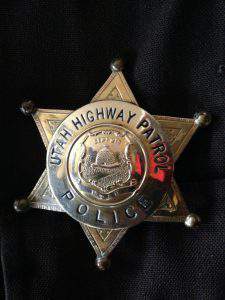 – How many items are there in your collection?
– It is difficult to answer this question, because – thanks God – my collection is increasing day by day. So far I succeeded in collecting police symbols from 127 states of the world. I have 1360 arm signals, 70-80 officer caps, 60 uniforms, coats, I have also complete dresses, depending on what the specific countries sent. I have lots of cap badges, decorations and other items as well. For example, I received the Kossuth Sword in 1994 from András Túrós Major General in the ceremonial hall of the police regiment. This was the way they acknowledged the work I had done for popularising the law enforcement organisations. And in the year 2001 Sándor Pintér, Minister of Interior sent me a beautiful decorative small sword, separately, with a courier, from Budapest. But in addition to this, I received a number of other appreciations, gestures, which pleased me a lot.

– How do you obtain the relics?
– Usually, first, I write a letter, which I, of course, translate to English. This letter includes, among others, that I would like to establish an international police museum in respect of the work of all the workers of law enforcement throughout the world, and I would be pleased to receive the objects, insignias they offer. I feel myself lucky, because I received a rather high number of responses. There are countries from where I was awaiting the responses in vain. For example, I did not receive any feedback from China and North Korea. Vietnam would be able to meet this request only if the Hungarian Ministry of Interior would officially ask them. To some extent I do understand their fear, since, it would be possible to misuse the uniforms, caps and badges, and they are possibly afraid of this. However, it was interesting that the communist Cuba reacted very fast to my request. They sent the badge of the Cuban revolutionary police from their embassy located in Budapest. I also would like to mention that I obtained the title of honorary policeman of the State of Alabama, the governor of the state himself acted in my case after he was informed about my collection. The related decorative deed was sent by post to Esztergom. And I was awarded the title of the honorary sheriff in one of the counties of Kansas State. 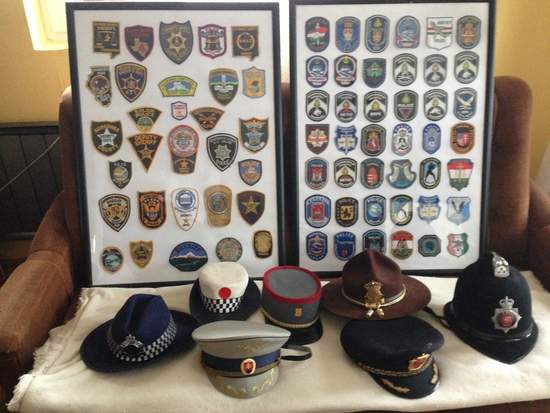 – Which is your favourite item in your collection, the item you are the most proud of?
– It is impossible to answer this question. It is like asking a mother which her favourite child would be. Each item is close to my heart. I would rather highlight some of the gestures. A policewoman arrived from Moldavia to Hungary, to the police Olympics. She personally brought me the cap, the arm band of the Moldavian police and she handed them over in Esztergom, together with a watch. Also, one of the Generals of the Peruvian police did the same. He was the military attaché in Vienna, and he directly came here, in order to be able to hand over the uniform and the flag of his country. I sent a letter to Jordan, to Queen Noor, with a Hungarian traditional tablecloth. Her husband was ill at the time, he had problems with his heart, and this was the way I wished him recuperation, and I informed them about my collection. Soon a package came, with the gilded Jordanian Royal Coat-of Arms; they made my collection richer with two police caps. 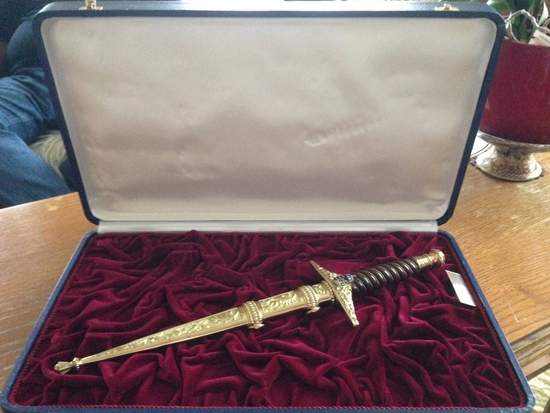 – Do you plan to organize a permanent or temporary exhibition in the future, where people may admire your collection at large?
– Definitely, my goal has been for 25 years to establish a permanently operating museum. Since I am a patriot, naturally I would like to have this museum here, in Esztergom. I already contacted the local government of the city with this issue, I am still waiting for their response. I am an optimist. The “Mária Valéria” bridge was standing on the Danube in ruins for decades, then – a true miracle – it was rebuilt and it connects the motherland with Upper Hungary again. The same way, I hope, this museum will also be realised, with the assistance of the local government of the city of Esztergom. Meanwhile, I exhibit my collection in the framework of a traveling exhibition under the name of “Road Show of Law Enforcement Symbols”. I presented this collection in ten counties of Hungary so far, but I already had an exhibition in Upper Hungary as well. If they contact me for this purpose, it’s a pleasure for me to meet the requests of this kind. 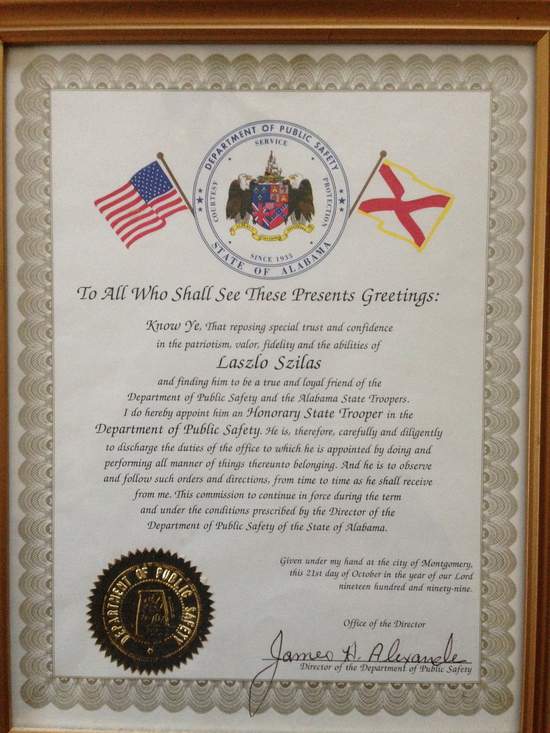