Budapest, June 9 (MTI) – The key to being elected to office in Europe over the next 10-15 years will be the ability to protect the European people, Prime Minister Viktor Orbán said on Thursday. 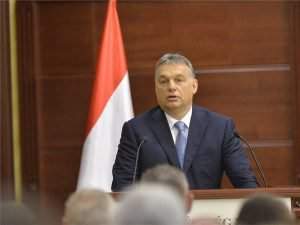 Over the next couple of decades, law and order will become more valuable in European culture, the prime minister said at a celebration marking Prosecutor’s Day.

Orbán said Europe’s political elite will only be able to “legitimise itself” once it starts putting law and order ahead of the economy. Economic achievements will no longer be sufficient to legitimise European powers, he said.

Orbán said law and order was one of the biggest legitimising factors in Hungarian politics today.

The prime minister said that the rule of law is especially important in a period of mass migration. The current wave of illegal migration has triggered a “moralising discourse” in Europe which poses tough challenges to the European legal system, he said.

The Hungarian government, in turn, has stressed since the very beginning that “the arrivals are also expected to observe the law. Those who kick the door open and violate the law upon their arrival cannot and should not expect a friendly welcome,” he said.

Orbán said that political criticism of court verdicts had ever since the 1990s ceased to be a taboo in Hungary. By now it has become common for the chief public prosecutor to be attacked in parliament or court cases in progress to be politicised, he said.

Orbán urged the prosecutors in attendance to ignore any political attacks they may receive. They should instead listen to their consciences and observe the related laws, and should not let anyone manipulate them or divert them from standing by their oath of office, he said.

Orbán emphasised that the organisational independence of the prosecution is a guarantee for Hungary’s rule of law.