Kolozsvar, Romania, April 17 (MTI) – The Democratic Alliance of Hungarians in Romania (RMDSZ) re-elected Hunor Kelemen as its leader for another four years at its 12th congress in Cluj (Kolozsvar) on Friday. 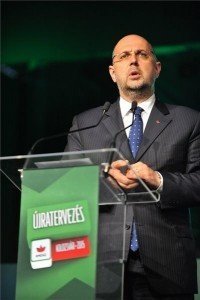 Kelemen had no rival in the vote, and was supported by 575 votes out of a total of 585.

On his election, Kelemen said his party was unrivalled in representing the interests of Romania’s Hungarians. “It is not newer and newer parties that the community needs, but an open and receptive alliance that is always capable of renewal,” he said.

Zsolt Semjen, Hungary’s deputy prime minister, told the congress before the vote that Hungarians in Transylvania are obliged by their historical moral and political past to stick together.

“RMDSZ is a guarantee of strong Hungarian interest representation in Transylvania, and it should not be allowed to be weakened,” he said, adding that the party has the greatest potential as a cohesive force.