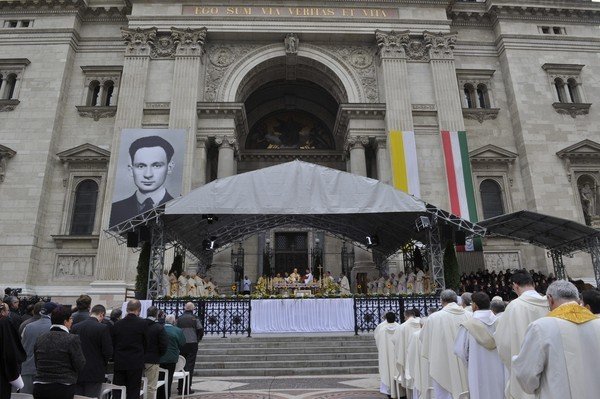 Thousands of people filled St. Stephen’s Square for Istvan Sandor’s beatification ceremony on Saturday. Sandor was hanged June 8, 1953, after being convicted in a show trial of treason and conspiring against the state. He is rehabilited in 1994 from democratic judge in Budapest.

A brother from the Catholic order of the Salesians of Don Bosco has been beatified in Budapest, 60 years after he was executed by Hungary’s communist regime.

He was born in 1914 (Szolnok, Hungary) and a printer by profession, Sandor served in the Hungarian army during World War II, delaying his wish to join the Salesians. After the war, he became a mentor to young men under his care at the order’s print shop. Sandor continued his educational work even after most of Hungary’s religious orders were dissolved in 1950.

Beatification is the next-to-last step to being declared a saint. Feast day is 8th of June. He is Patronage of pupils, Catholic Action, students, laborers, altar servers and Hungary.