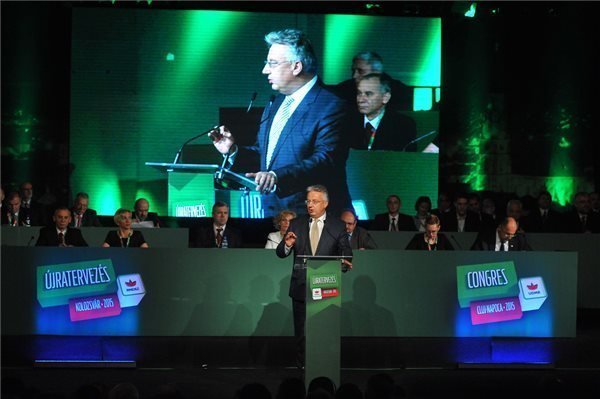 Cluj (Kolozsvar), April 17 (MTI) – Hungarians in Transylvania are obliged by their historical moral and political past to stick together, Deputy Prime Minister Zsolt Semjen told the 12th congress of the ethnic Hungarian RMDSZ party in Cluj on Friday.

“RMDSZ, the Democratic Union of Hungarians in Romania, is a guarantee of strong Hungarian interest representation in Transylvania, and it should not be allowed to be weakened,” he said, adding that the party has the greatest potential as a cohesive force.

Semjen read out a message by Prime Minister Viktor Orban, who wished much success in “re-planning”, the slogan chosen for party. He expressed thanks to RMDSZ’s outgoing leader Hunor Kelemen for working together as partners and joining forces in national issues over the past four years.

Semjen expressed concern that bilingual signs, the singing of Hungary’s national anthem and the use of national symbols are still thorny problems in Romania. “We would never have thought that an official document would be issued in the EU declaring autonomy efforts as a source of danger,” he said.

The Hungarian community of Transylvania has never asked for anything that is unacceptable within the EU, Semjen said, stressing the need to thwart all attempts to blur the demands of Transylvanian Hungarians with racism and extremism.

Socialist leader Jozsef Tobias said that the RMDSZ, pursuing a policy in the spirit of pragmatic national interest representation, had established a new era of Hungarian-Romanian co-existence. He called for the revival of bilateral relations and the practice of joint government sessions.

LMP party co-leader Andras Schiffer said that “re-planning” should also be considered an option in Hungary, and expressed support for the autonomy endeavours of Transylvanian Hungarians.