Sights that are definitely worth a visit in county Vas

As spring is coming, good weather and sunny days lure people out to open air. Having a free weekend, many people decide to take a trip. Some of them choose to spend their free time traveling abroad, but it should not be forgotten that our little country also has its beautiful sights.

It’s worth considering to visit county Vas, the westernmost county of Hungary. It’s a very diversified region, having plains, mountains and hilly areas too. All of its smaller and larger towns have their own natural, historical, architectural or cultural attractions.

Its administrative center, Szombathely is a town with great history, one of the oldest towns founded in Hungary. The city was established in the Roman times by emperor Claudius in 43 AD. Its establishment is due to its location besides the Amber Road, which was an ancient trade route from North Europe to the shores of the Mediterranean Sea. Visitors can still walk on the remaining parts of this ancient road, or more above them – the original residues are covered with plexiglass in the main hall of OTP Bank, in the main square of Szombathely. A renovated road section can be seen in the Sanctuary of Isis (Iseum), the ruins of which was discovered during excavations in the 1950’s, and which also have been recently renovated. Today it’s functioning as an archaeological workshop and warehouse, presenting temporary and permanent exhibitions. The beautiful main square of Szombathely, and its enthralling synagogue are also worth a visit, as well as its famous historical carnival held in every August.

County Vas is also famous for its fortresses and castles. The classicist style Batthyányi-Strattmann castle in Körmend, together with the castle park is a nice place to visit, as well as the medieval Nádasdy fortress in Sárvár, surrounded by the former moat where now lies a great park. Maybe the most beautiful medieval castle is located in Kőszeg, which has a charming old town with traditional restaurants, cobblestoned streets, and old fashioned houses. Kőszeg lies in the foothills of the Kőszeg mountain, in the valley of Gyöngyös creek.

If someone would rather spend their free time in the nature, they don’t even have to leave the surroundings of Kőszeg. Up in the hills source the Seven Springs, one of the region’s favorite tourist spot, deep in the forest near the Austrian boarder. The springs got their names from the Seven Hungarian Chiefs, Álmos, Előd, Ond, Kond, Tas, Huba, and Töhötöm. Their crystal-clear cold water tastes very good after taking the 5 kilometers walk from the nearest parking lot, Szabó Mountain. Another “must-be-seen” spot is Írottkő, or the Written Stone, the highest peak of Transdanubia with its 883 meters height. Reaching the top, tourists can climb up to the lookout which stands in the Austrian-Hungarian border, offering a beautiful panorama. If the weather is clear even Lake Balaton is seen.

Further natural sights are the Kámon arboretum near Szombathely, and the Chernel-garden arboretum in Kőszeg, both of them ensure a nicely spent day walking through the wonderful parks between rare, special plants. They are most worth to visit in the spring when the bushes and trees of the arboretums burst into bloom. 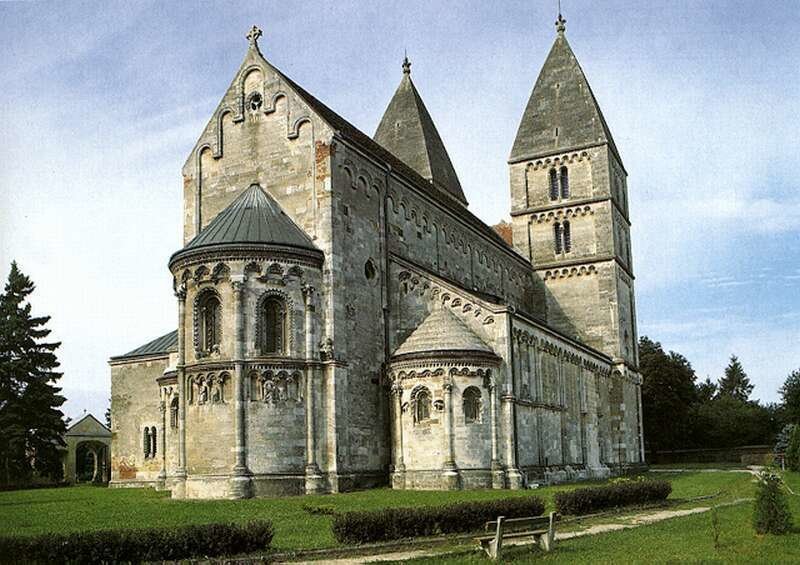 If you ever visited Vajdahunyad castle in Budapest city park, you must have seen the Ják Church with its beautiful entrance. However, it is only a partial copy of the original church located in the village Ják in county Vas. Actually, it is a monumental basilica, an outstanding work of the Hungarian Romanesque architecture. The admission is very cheap, but the experience is memorable. Read more about Ják Church HERE.

The county has innumerable attractions besides those mentioned above, and lots of its beautiful places are not indicated in guidebooks – a nice narrow alley in an old town, a cozy restaurant with great food, a beautiful meadow in the countryside with wildflowers, only waiting for someone to discover them. Everyone can find their favorite place in Hungary, and for some, this place is located somewhere in Vas county.