Some of the most beautiful squares in Hungary

Origo.hu started an article series about the most beautiful squares of Hungary, Europe and Budapest a few days ago. The first article lists some of the most special squares in Hungary outside the capital city. Some of them are quite well-known and some of them are not as much in the limelight. Naturally, the list is subjective, but is definitely a good collection of places worth visiting.

No matter what kind of vehicle you choose, Baja is quite far from Budapest, however, it is worth spending some days there. The Szentháromság (Trinity) Square is one of its main attractions, which some people compare to Venice’s Saint Mark Square. It is, of course, an exaggeration, but the feeling is similar. The most interesting part of the square might be the block-pavement overlay as it has survived history. Other than the square, Baja is also known for its divine fish soup and is the hometown of our successful swimmer, Katinka Hosszú. 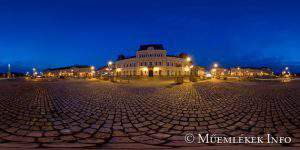 This square, renovated recently, is an ultimate favourite of people visiting the beautiful city of Eger. You can take amazing photos of it from all angles: standing on the ground or looking over from the Castle of Eger. However, its trapezoid form can be best seen from up above. The most famous monument of the square is Alajos Stróbl’s statue of castle captain István Dobó. The square is usually crowded, so if you want to have some alone-time in the middle of the city, then you should go in the early hours. 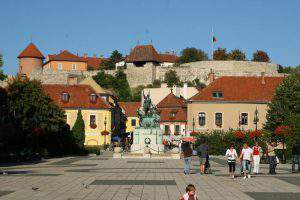 The main square of Kaposvár is 10 minutes away from the railway station and went through renovation in 2003. The writer of the article has mixed feelings about this square as he was sad to see that the art nouveau Korona Hotel was replaced with a less imposing hotel. Still, it forms an important part of the cityscape and many people think of it as one of the most beautiful squares in Hungary.

Kőszeg used to be one of Hungary’s smallest towns before urbanisation. It has a special feeling, which might be due to its human-scale size. What makes this square unique is its closeness and that cars are not allowed to enter. One of the oldest Hungarian city halls, functioning since the 14th century, can be found at the square. Also, the castle is only a few steps away from there. Sitting, reading, looking around or just breathing in the historic air of the place is magical. And don’t be surprised if you hear the chime of bells at 11 am as it commemorates the successful defence of the castle against the Turks in 1532.

One of the smallest but most beautiful squares of Hungary can be found in Márianosztra. The block-pavement square full of flowers is fascinating in all seasons. Many people know that the town was founded by king Louis the Great, but what most people don’t know is that the walls of the church and the prison abut. The Magyarok Nagyasszonya church was built in the 1890s, near the onetime monastery, which was then turned into a women’s prison.

Even though the Széchenyi Square is bigger and maybe even more popular than this one, the writer highlighted the Dóm Square as some locals believe that the renovation changed the original feeling of the Széchenyi Square. The building of the Episcopal Archives, a huge church and Ferenc Liszt’s special statue are the main attractions at the Dóm Square. The statue faces the cathedral, as legend has it that Ferenc Liszt was able to hear the chime of the bells best this way. This is probably one of the most beautiful small squares of Hungary, which fits the four-towered dome despite its size.

This square is very different from the others on the list. It doesn’t have block-pavement or art nouveau buildings, but it is the perfect example that modern architecture is not inelegant by all means. The buildings, the trees, the paving and the mixture of green and grey all give off a unique feel. It’s no surprise that locals are very proud of their square.

Visiting the Zrinyí Miklós Square equals travelling back in time to the Middle Ages. Its lion statue is the oldest Zrínyi memorial in Hungary made by István Gerendai in 1878. The lion, standing on red marble mounting, is treading the half-moon Turkish flag. The animal can be also seen in the coat of arms of Szigetvár, where two lions symbolise the fight and death of the sultan and Miklós Zrínyi.

The smallest square on the list, which has a unique feeling due to the block-pavement and the abbey, lies quite steeply in the city widely known for its lavender. The abbey was founded by King Andrew I in 1046 in honour of Saint Ányos and Virgin Mary. The square was named after the king but this might pose a tricky question in a quiz show as most people connect this lovely place to the abbey. 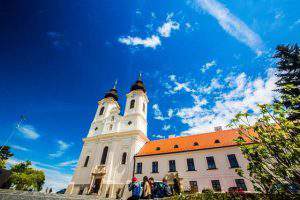 Even though the city of Vác can be found in the vicinity of the capital city, it’s not really a touristy place. However, the long renovation and reconstruction process turned out very well. The square was already a religious, economic and cultural centre in the Middle Ages. The Viennese gate was on the northern side with the city hall in front and the Saint Michel Church. This is how the special, prolate triangle shape was formed. The writer very much likes the colourful row of houses on the side of the Danube, which blend in with the feel of the baroque square.