Down south by the border – A portrait of Szeged

The “Sunshine City” of Szeged with its outstanding university, illustrious buildings, wide avenues and cool, shady parks sits south of the Puszta/Great Plain and shares a twin-town identity with the renowned Cambridge in England. Students come to both cities from all over the world. “Sunshine City” is not some clumsy tourist cliché: Szeged and its immediate area do have higher than average reported sunlight hours. An article by a guest author, Alexander Stemp.

It’s a 200-kilometre drive south on the M5 from the capital, which is a two- to three-hour journey time either by road or rail. Apart from being an attractive destination in its own right, Szeged is directly en route to the southerly region of the Balkans, not so far beyond its borders. Once arrived in Hungary’s third-largest city it’s easy to find your way, with the Tourist Information Bureau on hand by the university at central Dugonics tér. After you receive a complimentary map from the instructive staff, the main sites really are within easy reach.

Should you travel to Szeged by train, the first notable landmark you see is the grandiose, protruding “Votive” Catholic church tower tops that overlook the city. Use these for an orientation point, as it’s either a tram ride or a pleasant 20-minute stroll from the train station to this particular landmark, situated at the atmospheric Venetian-esque Dom Square courtyard.

The “Votive” is an exalted architectural wonder, built fairly recently from 1913 to 1930, with distinct Roman, Gothic and Eastern Byzantine influences. It also has a simple but very effective colour co-ordination, with lightish-brown brickwork leading the way and additional fine touches of white lined “décor”, a unity that distinguishes this ennobling building in the heart of the city.

Also overlooking the Dom Square is the enchanting Musical Clock. This exquisite piece of mechanical art displays fine, distinct figurines that pop out on the hour onto a “stage” and “perform” to much applause from the camera-clicking spectators below, before shifting and rotating back to their confines until it is time to come out again. 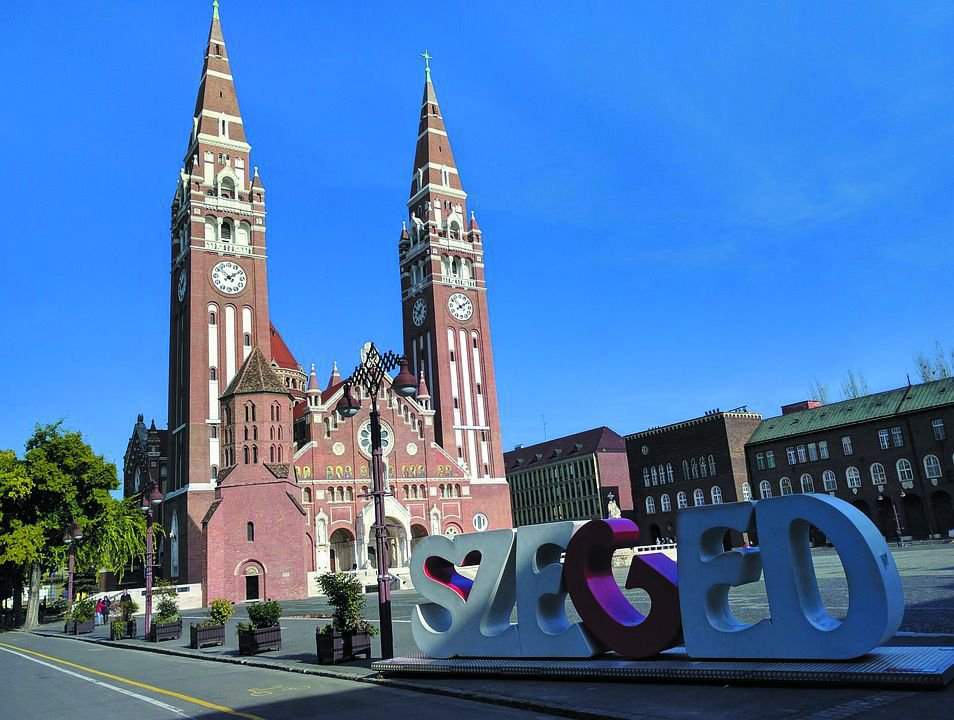 During the height of summer, this open area hosts the resplendent Szeged Open Air Festival, with a mix of theatre, opera, jazz and so forth. Find out more at www.szegediszabadteri.hu

A little further on is the main centre with its wondrous, heady mix of classicism, eclecticism and art nouveau buildings from the turn of the 20th century. Most notable is the Reök Palace, which resembles a large meringue in its purist white essential form, decorated with very fine linings. This is followed by the empyrean Deutsch Palace with its exclusive Zsolnay folk-art ornaments, giving a real sense of romance and charm. Also the other-worldly Gróf Palace, a building so extraordinary it’s a stage set for a fairy-tale production, along with various others along the way.

The reason for the rise of these remarkable glories came when much of the city was rebuilt after the Great Flood of 1879, which wiped out almost everything in Szeged. Emperor Franz Joseph announced soon afterwards, “Szeged will be more beautiful than it used to be”, and kept his promise. During the forthcoming years and well into the 20th century, a new modern city emerged, and this is what we see today.

Take in the splendour and sample the delights of the café scene before approaching the yellow, neo-baroque Varosháza, the town hall, built in 1883 with its distinctive “Bridge of Sighs” adjoining The House of Labour next door and facing a fine, well-tended, shady park.

Further on is the New Synagogue built in 1903 on Jósika utca, which really deserves attention with its impeccable interior and awe-inspiring glass dome, made up of mainly varying blue and white pieces as if to resemble an eye. Miss this outstanding beauty at your peril as it really is quintessential Szeged. 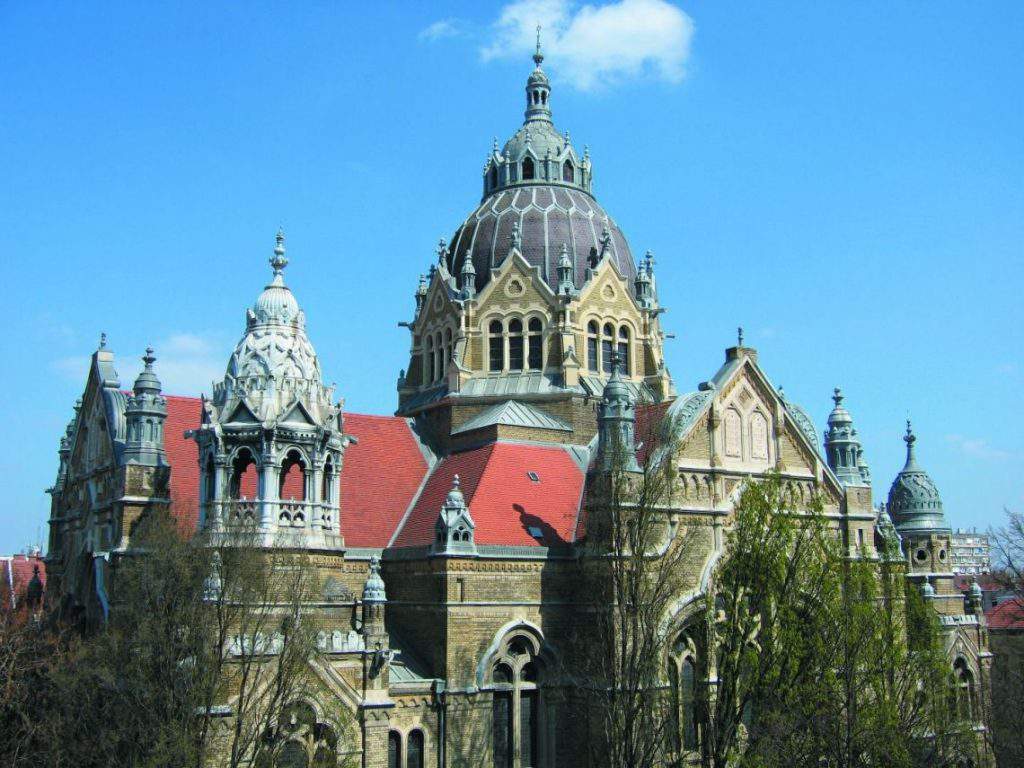 Leave the town hall area and cross the park in the direction of the Móra Ferenc Museum, and in further view the Bélváros Híd, the main town bridge that overlooks the elysian River Tisza. This juncture leads to the Botanical Gardens and residential Szeged. Walk along the river shoreline, find a pleasant restaurant and inquire about boat rides to round off the occasion.

Probably the last thing to do before leaving is to visit the Pick Salami and Paprika Museum, and “pick up” something tasty before returning home. Szeged has its place in the country’s food industry and is famous for its fine paprika, its Halászlé (fish soup, made with carp and catfish) and its own brand of salami. If fish is your thing, (I cannot vouch for the chips) then note down the Tisza Fish Festival hosted in Szeged every September, where cooking competitors compete for the best fish soup and serve it up to willing consumers for three rip-roaring days by the riverside, with much obligatory wine, beer and cheers to follow.

For those staying on, I recommend a night out at the neo-baroque National Theatre with its distinct Viennese-styled impetus. The Szeged Symphony Orchestra often performs there. Further information can be found online and at information bureaus. 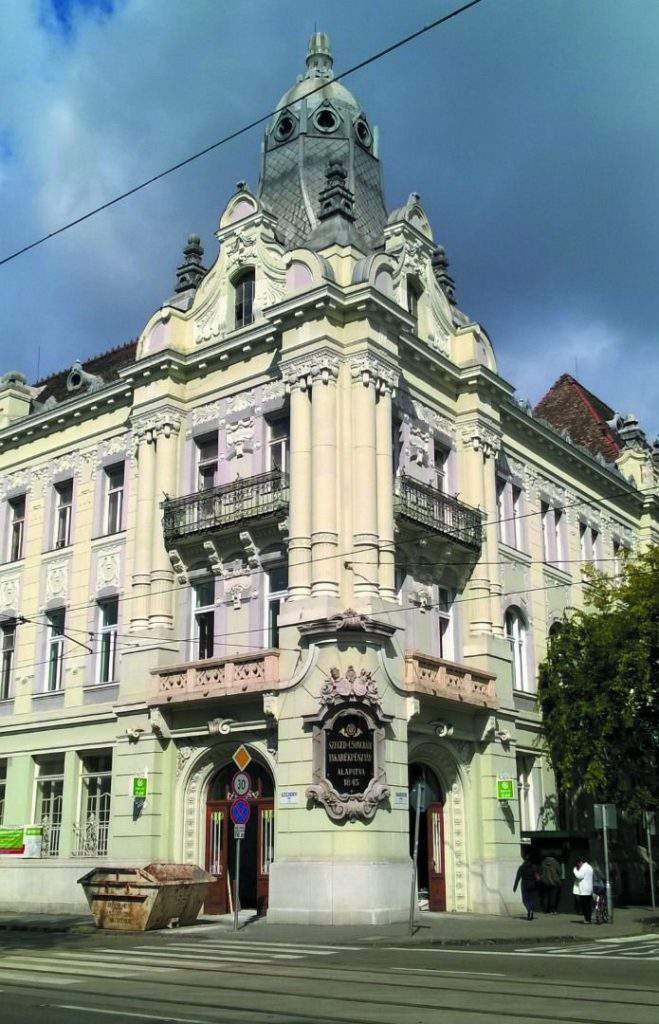 Beyond the high sunshine, there really is a Balkan atmosphere when it comes to observing Szeged’s night-life as it is most inviting. See for yourself, even in winter, and do this your way.

For those enamoured of traditional and rural life, make your way a few kilometres out of town to the beautifully renovated Sunshine House museum at Szeged Alsóváros. As well as the house and garden, there is an exhibition dedicated to life in this region in pre- and post-20th century times.

For architectural enthusiasts, especially art nouveau, it’s not enough to conclude this tour in Szeged alone, as this is only part of a sight-seeing trilogy I have devised. To continue seeing more marvels, I recommend Szabadka/ Subotica and Lake Palic/ Palicsfürdő, 50 kilometres westwards in Serbia.

Although fairly close together, these cities went three separate ways post-Trianon 1920 but aesthetically they are still “together” despite the precariousness from that time. All are now more accessible than ever before and connect with Budapest, thus giving much to look forward to for next time. Optimally, it would be wonderful to see all these in one go, but careful planning is required as I cannot guarantee local public transport will provide a sufficient through service to all three via border crossings. Local advice is required; perhaps a hired car or taxi is advised. Or see them all by bike, as I did when I first made this trip 10 years ago.

In addition to everyday life in Szeged, there is a wondrous Rose Festival every summer in the outskirts at Szőreg. Roses and lavenders grow profusely in this region. As locals celebrate this three-day festival with their famous flowers, their streets and squares come alive with “blooms on parade”. This is followed by the Onion Festival hosted in Makó, a small town 30 kilometres onwards, during September. This perhaps speaks for itself, and contains much family fun and interest for the Csongrád County agricultural scene. It is a piquant article in itself for another time.