The ‘ruin pubs’ of Budapest 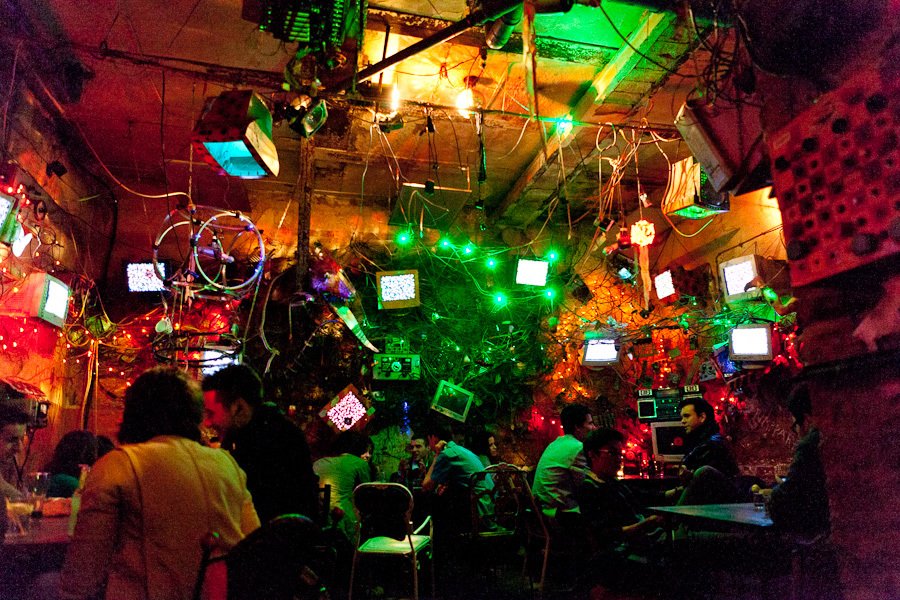 Stepping into the “ruin pubs” in Budapest’s seventh district can be a sensory overloading experience. Blending the old and the older, the vast spaces within these eclectically decorated bars celebrate forgotten and re-purposed items of all kinds, which are themselves housed in crumbling structures that were abandoned and left in a state of pseudo-decay since the 1940’s, usatoday.com reports.

Emerging on the scene in recent years, the ruin pub resurgence has sparked a major revitalization of the Jewish quarter, a formerly run-down neighborhood on the Pest side of the Danube in the shadow of the city’s largest synagogue. Previously, the area was known for its deserted buildings with a mournful past, as this formerly bustling area was left an impoverished ghost town after thousands of Jews were deported during WWII. Throughout the last few decades, the neglect continued as a large Romanian population relocated to Budapest in the 1980’s and moved into many of the empty houses and apartments. A intangible pall hung over the area until very recently when the ruin pubs kicked-started an unexpected renaissance.

Today, the area is red hot and flourishing with a real hipster vibe. Its main streets including Király utca and Dob utca flow with lively crowds hanging out at coffeehouses, restaurants and wine bars. Each of these businesses continues to co-exist along with some traces of Jewish life from days gone by, such as a few smaller cafes and bakeries.

According usatoday.com, launched as an organic, grass roots endeavor, the ruin pubs pioneer was Szimpla Kert (Simple Garden). It was opened in 2001 by four recent college graduates with a vision: to create an artsy, fun watering hole within an abandoned building in a neighborhood with a thirst for vibrancy. The bar quickly caught on and attracted the attention of locals and ultimately a cult following. 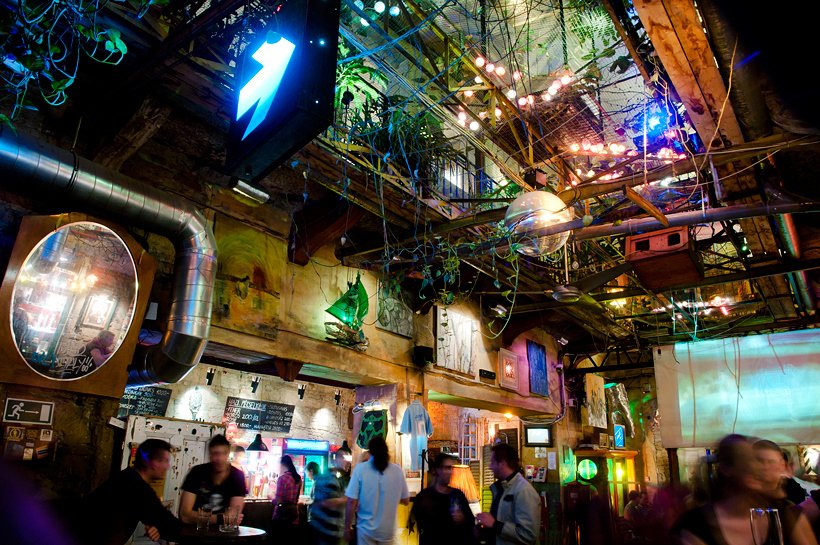 The Szimpla Kert ruin pub was the pioneer in the movement to convert abandoned buildings into engaging night spots, using refuse and odd collectibles as decor. Szimpla is a hodgepodge of whimsy. A cavernous structure that was a former factory, and later residences, the multi-level building features a mix of indoor and outdoor spaces, multiple bars of all sizes, and plenty of smaller rooms tucked away throughout. The second floor bar overlooks the main courtyard with a dazzling cornucopia of visual stimulation: Some of the diverse décor includes old computer monitors blinking with bright images and surrounded by Christmas lights, creating an artistic low-tech mural; bicycles suspended in the air; a chessboard with neon-colored pieces mounted sideways; a claw-foot bathtub sawed in half and spray-painted, and an antique car transformed into a picnic table, all accented by lampshades of all shapes and sizes tied together with mismatched patio furniture.

The usatoday.com said, with about 30 ruin pubs in Budapest, revelers have a lot to choose from. Other ruin pub hotspots are located an easy stroll away from Szimpla, and feature similar décor as well. Fan favorites include Instant, Fogasház and Wndrlnd. All share similar attributes, and some have DJs and live music on some nights, but each boasts its own outrageous personality and vibe.

Ruin pub patrons are as diverse as the bars themselves, and range from young locals to tourists of all ages, who sip local draft brews at reasonable prices (starting about $2.50 per glass) while enjoying the funky, cool ambiance. Many are simply wandering around snapping images and admiring the retro-trash-turned-art installations that are crammed together everywhere.

The ruin pubs offer a limited menu, featuring traditional bar food like Hungarian pizza ($3 for a generous slice), an array of salads, warm sandwiches and some vegetarian offerings for about $4-$5 each. And for those who enjoy a fragrant smoke with their drinks, some pubs offer hookah pipes as well.

Not surprisingly, some modern amenities are lacking. The “free WiFi,” is often spotty at best and restrooms are not exactly the most updated. But that’s all part of the adventure. After all, to really appreciate a ruin pub is to experience what a true spectacle they are.