Vlv.hu writes that the six iconic Hungarian water polo players who won three Olympic gold medals in a row in Sydney, Athens and Beijing as part of the men’s water polo team were enrolled to the immortals of water sports in Santa Clara, USA.

Dénes Kemény, the coach of the three time Olympic champion team who was already “enrolled” in 2011, also attended the International Swimming Hall of Fame celebration, which was held last Saturday night. 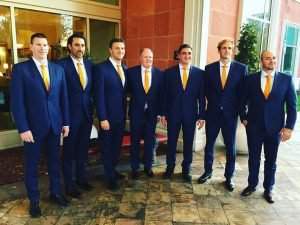 Tibor Benedek: “I am very happy and proud that the six of us were honoured at the same time. I am especially happy that all of us could be here and share this experience. Naturally the other 15 people, who are “only” two time or one time Olympic champions, the whole crew and Dénes Kemény are also part of this success.”

Péter Biros: “The celebration was a fantastic experience, another great memory at the end of my sport career. I think we only realised it now how glorious and big it was to win three Olympic Games, and to top it all we did it in a row. I had more time to think about this since my retirement, and it really seems like a huge achievement.”

Tamás Kásás: “Another acknowledgement which reminds me of the historic successes I was able to achieve with these great men. I am proud of the 17 years I spent in the Hungarian national team. I want to thank all of the great players and trainers who accompanied me on this amazing path.”

Gergely Kiss: “When you hear about celebrities being awarded with similar honours you don’t really think that this could happen to you as well. At the same time, I believe that the winning of awards can’t be the ultimate goal of a true sportsmen. What is important to me is that I could be the part of this community and we lived through all the hardships, fun times and successes together.”

Tamás Molnár: “Joining a circle like this, which represents the whole water sport community, is a huge honour. Not to mention that 21 players contributed to the three Olympic gold medals, but only the six of us could be here. If we look at the names of iconic Hungarians who are part of the International Swimming Hall of Fame, then I believe that this is the greatest achievement we could’ve asked for except for our results in the pool.”

Zoltán Szécsi: “This is a real honour, I don’t even know how many goal keepers are there among the immortal water polo players. However, I know that I am the only three time Olympic champion goal keeper and this feels especially heart-warming.”