The world’s biggest bird statue goes to NFL from Hungary

According to index.hu, Gábor Miklós Szőke, the creator of the Fradi eagle in front of Groupama Stadium, was looked up on the internet by NFL’s Atlanta Falcons, who requested a bird statue for their new and gigantic stadium. It will be assembled twice, shipped across the ocean, and the whole team will fit under it.

Atlanta Falcons’ new, one and a half billion dollar stadium will be inaugurated in 2017, which is where one of the biggest sport events, the Super Bowl, will be held a few years later. The biggest bird statue at the stadium is designed by the Hungarian Gábor Miklós Szőke, who – among others – created the Fradi eagle. 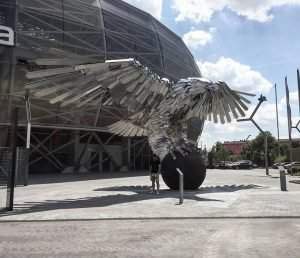 Due to the Mercedes-Benz Stadium’s unique design, the arena will be quite spectacular in NFL: it will have an opening-closing roof structure that will look like the spreading and closing wings of a bird. At least they’re going for this illusion.

A huge stadium needs a monumental statue, which introduces the symbol and the eponym of the team, the falcon. Georgia State’s Savannah College of Art and Design was entrusted with the task to find the most suitable artist for this task. This is how Szőke came into the picture.

“The Savannah College of Art and Design looked me up about a year ago and asked me if I wanted to design a statue in front of the main entrance of the new Mercedes-Benz stadium. They asked this via email, because they heard and read about my work before. They visited us in a few weeks’ time and I showed them some of my works like the Fradi eagle and my horse statue standing in front of a huge Slovakian sport complex” said the artist.

His new work of art will be the world’s biggest bird statue, but the making of a statue this big is a complex job of a building industry scale.

“Its height passes 12,5 metres, its wing-spread passes 20 metres. After we received the visual plans, I started thinking about the concept. I was inspired by the plasticity of the stadium’s futuristically opening glass-metal roof structure, so I started experimenting with triangular and trapezoid sheets cut in a sharp angle. This is how the idea of a falcon holding an NFL ball in its claws came to life. The material of the falcon is stainless steel, the ball is bronze, under which I designed an oval, four-staged concrete podium, where the whole team can fit on.”

Due to the sizes, the execution will be tough work. The designing started a year ago, while the works one month ago. They are currently welding the stainless steel base and shaping the ball, which will go into the bronze foundry. After the framework is done, the laser tailoring and structuring of the feathers will be the next step, followed by the creation of the statue plasticity.

“We will assemble the statue twice. First in my own studio, to be then dissembled and packaged by pieces for the transatlantic delivery to Atlanta next January. We’ll have two months there with my team of 30 to finish the statue.”

The big show starts next September, because Atlanta Falcons will move in, and NFL’s season opening match between Alabama Crimson Tide and Florida State Seminoles is going to be held here. Not to mention that 2019’s Super Bowl will be held in the stadium, as well.

The question which has been occupying our minds since the outbreak of...

The spread of the novel coronavirus disease (COVID-19) has incurred global traffic…
We and our partners use technologies, such as cookies, and collect browsing data to give you the best online experience and to personalise the content and advertising shown to you. I accept
Privacy & Cookies Policy