15th of February – The opening of the Great Market Hall

The Great Market Hall or Central Market Hall (“Nagyvásárcsarnok”) is the largest and oldest indoor market in Budapest. The idea of building such a large market hall arose at the end of the 19th century. It was opened in 1897 and was renovated completely for its 100th anniversary. It is a uniquely incomparable experience.

At the end of the 19th century, there were outdoor markets at almost all big and crowded squares and they were open more or less frequently. These were the markets of Ferenciek Square, Kálvin Square, Klauzál Square and Köztársaság Square which didn’t comply with the hygienic requirements but disturbed the continually growing traffic and the establishment of parks and resting areas. The abolishment of these markets was only possible by building modern market halls.

On the 10th of July, 1891 Budapest invited applications for the designing and the execution of a central market hall that had to be appropriate for retail and wholesale trade, for the initiation of rail tracks and the transmission of the goods that arrived on River Danube. Nine applicants entered until the deadline in December. The professional jury consisted of great authorities like Alajos Hauszmann (architect of the New York Palace), Imre Steindl (architect of the Hungarian Parliament), Győző Czigler (architect of the Széchenyi Bath) and other foreign architects. They chose three winners but the work of Samu Pecz, the architect professor of the Budapest University of Technology and Economics, stood out of his French and German fellow competitors. 11 electors chose his work as the best out of the 15 members of the jury.

The construction started in the August of 1893 and the formal opening of the Great Market Hall was held on the 15th of February, 1897. The architect designed it to have a wrought-iron framework which was a masterpiece in itself. It is one of the most beautiful steel structured space-knotting with its tracery, airy stands and grid sustainers. A distinctive architectural feature is the roof which was restored to have colourful Zsolnay tiling from Pécs. The area size of the building is 10,000 square meters, which is covered by steel structure. 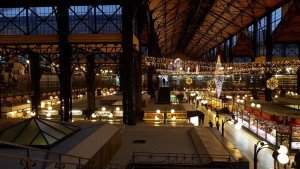 Budapest’s Great Market Hall belonged to the most modern indoor markets at that time, with up-to-date lightning and refrigeration. However, the city soon outgrow the market hall so in 1902 they removed the wholesale market and the rails tracks from the side-aisles

Nowadays the Great Market Hall is a real tourist paradise because you can find many-many traditional Hungarian delicacies like strings of red paprika and garlic, Hungarian salamis, sausages, hams and other meat products, fresh pastries, dairy products, Hungarian wines and pálinka and of course, souvenirs. You can also try local dishes on the upper level. It is honestly a special experience, so make sure to visit the Great Market Hall if you have the chance! 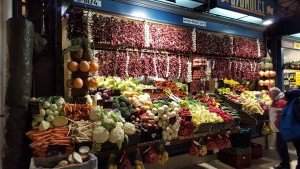