1956 – Ilona Tóth’s case: In the show trial communists was convicted and executed

Ilona Tóth was born on October 23, 1932. Her childhood was poor materially but rich spiritually. The young woman’s parents divorced around the time of her birth, and her mother raised her on the meager salary of a schoolteacher”taking food from her own mouth” to feed her child. The mother bestowed two special gifts on her daughter: faith in the teachings of the Reform Church and a love of learning. As she grew up Tóth blossomed into a diligent, intelligent student. She was a daring athlete as well—a fencer a sky diver and a glider pilot. The little family’s economic straits were evident to her classmates—Ilona owned just one gray skirt and two white blouses. But she was always immaculately clean, washing one of the blouses out each night. Her exemplary qualities were widely admired, and she was elected to leadership positions in student organizations. 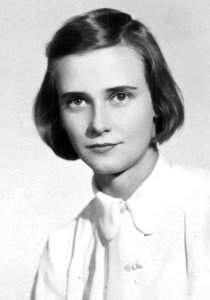 As a revolutionary, Tóth tended selflessly to the wounded, whether street fighter of communist, Hungarian or Russian. When she was not caring for the injured, she was making forays to the Austrian border to secure food an medical supplies. The young intern barely slept, relying on caffeine tablets to keep going. And when the uprising was suppressed, she joined the resistance, hiding freedom fighters among the sick and wounded and assisting and assisting in the printing and distribution of illegal newspapers, including Obersovszky’s Életünk. But Tóth’s greatest sacrifice—the act that won her the epithet “Hungary’s Jeanne d’Arc”–occurred after her arrest, when she took responsibility for the murder of Kollár in a fruitless effort to protect two co-defendants charged with participating in the act.

When the death sentence was handed down around Easter, the anguished mother stated that she couldn’t bare to live if her daughter was executed. “Mother don’t even think about such things” replied Tóth. Before Tóth was executed her despairing mother asked “Where is Christ my child,” Ilona responded, “Here, right next to me.” During her mother’s final visit, Tóth reportedly comforted her with these words “Don’t cry mother, I will die as a brave Hungarian soldier. You know that the charge is false, and they just want to besmirch the holy revolution.”

Ilona Tóth was executed in 1957, at the tender age of 25, with other revolutionaries, ordered by the first secretary of the communist party, János Kádár, a bloodthirsty lumpen prole.