4th Of June: A Date Which The Hungarian Nation Mourns 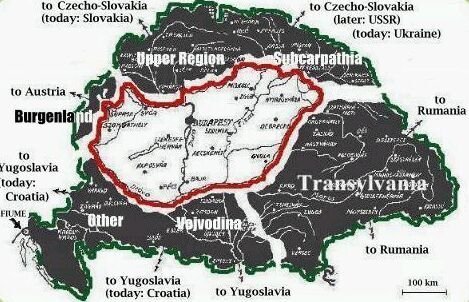 94 years have passed since the signing of the Treaty of Trianon, which ended the First World War for Hungary and, more importantly, brought drastic changes to the country by removing more than two thirds of itsoriginal territory.

Hungary was on the side of the Central Powers in the World War I and as such, was on the losing side. The war was devastating for the entire world, more than 37 thousand civilians and soldiers died. For Hungary, however the true catastrophe only came two years after the fightings ceased on the battlefields.

It all started in 1919, during the Paris Peace Conferences, where the allied victors laid down the peace terms for the Central powers. Each losing country was treated in a different treaty at different times. Germany, for example, signed the Treaty of Versailles in 1919 while Austria the Treaty of Saint-Germain in the same year.

The nature of these treaties was heavily disputed during the conferences. Everyone from the allies had different ideas to approach the issue. The famous Fourteen Points of Woodrow Wilson, president of the United States, was a quite optimistic and idealistic. Nobody knows, however, how it could have worked because the leaders of the Allies from Europe discarded it as they were seeking their national interests and retribution over the Central Powers rather than making peace peacefully and hence ease the tension.

This meant that instead of Wilson’s Fourteen Points the rather radical approach of these sides, especially the French Prime Minister George Clemenceau’s, were equipped during the negotiations. The aim of France was to completely nullify the power and possible threat of Germany. It certainly put the country into despair for a while. Nevertheless, many people criticized the conditions, claiming that the treaties are too strict and are rather counter-productive in this way.

The Treaty of Trianon concerning Hungary was not very different from that of Germany. Although Hungary played a minor role in the war as it had little choice in shaping the events of 1914, the treaties were just as harsh. The most important point was that two thirds of Hungary was stripped off and given to neighbour countries. In theory, this was based on demographics and only those parts were taken which had a majority of an ethnicity other than Hungarian, yet these were not the most adequate estimates as the regions were totally mixed up ethnically. Another interesting fact that Hungary did not get the chance to represent itself at the peace negotiations, only the neighbour countries were there with their territorial requests (which were considerably larger than the actual proportions became). Hungarian representatives were only able to sign the treaty, their ideas, additions were ignored.

Although the future borders-in theory- were based on Wilson’s principles, in reality they were altered many times. Most roads and railroads parallel to the borders were given to the other country, thus removing entirely Hungarian-inhabited places.

At the end, the following territories were taken from Hungary: Transylvania (Erdély) and other eastern territories, all to Romania; Kárpátalja to Ukraine, the Felvidék and Csallóköz to Czechoslovakia; a little western part became part of Austria; the southern parts were given to the Kingdom of Yugoslavia. Altogether Hungary’s territory without Croatia was reduced from 282 870 km2 to 92 963 km2, the population decreased form 20 886 487 to 7 615 117.