According to Budapest Airport offical site bud.hu, The 3-month-long renovation of runway I at Budapest Airport has been completed; thus, the airport reverted to regular, two runway operation. The airport operator spent 1.65 million EUR to replace the concrete pavement on a 900-meter-long stretch of the 3-kilometer-long runway.

The Airbus A320 used by Lufthansa on flight 1677 to Munich was the first aircraft to take off from the renovated runway I at Budapest Airport, at precisely 14:00 hours this afternoon. The runway was reopened to traffic as planned, after three months and one week. Single runway operation meant an increased workload for air traffic control, especially for staff working in the tower and the so-called terminal maneuvering area, but HungaroControl performed its task safely and professionally. The reconstruction was necessary primarily due to aviation safety reasons, as the old concrete slabs and the foundation of the runway, constructed 30 years ago, were no longer able to withstand the loads from aircraft taking off and landing.

The renovation affected a 900-meter-long section of the runway towards the Vecsés end, where the central elements of the 45-meter-wide concrete strip had to be replaced, from the foundation, including the airfield ground lighting fixtures. The project cost 1.65 million EUR (just over 500 million HUF). Budapest Airport scheduled the renovation so that the works would be completed before the summer peak season and the FINA Aquatics World Championships to be held in Budapest.

According to chief operating officer Péter Huszka, the airport operated without major disruptions during the closure, with runway II, although arriving and departing aircraft had to taxi longer distances, depending on the wind direction. “There was an unusual increase in air traffic in some areas around the airport, where normally, only a fraction of the flights would operate. We thank residents for their patience, whereby we were able to execute this reconstruction over the past three months. This will guarantee the safe operation of the airport for a long time to come,” said Péter Huszka. 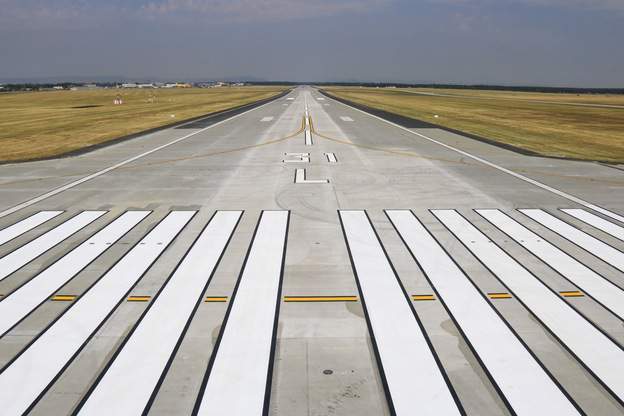 “We did everything we could to renovate the runway in the shortest possible time and the best possible quality,” emphasized Sándor Kovács, group leader from Budapest Airport’s Corporate Unit Technical, who managed the project. He added: “The most important consideration for the reconstruction was to ensure aviation safety. Our engineers, project managers and subcontractors often worked during the night and on weekends, so that the runway could be reopened for the summer peak holiday season. In addition to the concreting works, the bitumen-based jointing material between the concrete slabs was replaced with a polymer-based one, along the entire length of the runway.”