Hungary’s capital Budapest has revealed its UEFA EURO 2020 host city logo – with UEFA president Aleksander Čeferin promising it will be a “fantastic host” at a tournament that will unite Europe.

Hungary’s pride at its distinguished football history was clear for all to see as the capital Budapest unveiled its UEFA EURO 2020 host city logo. The Ministry of Home Affairs hosted the unveiling ceremony on Wednesday and UEFA President Aleksander Čeferin was present for the occasion.

Budapest is one of 13 cities across Europe which will stage EURO matches in four years’ time, a tournament which will mark 60 years of the EURO, and will host three group stage matches and a round-of-16 encounter. The aim for 2020 is to build bridges between nations and fans so each host city’s individual logo features a famous bridge from that city. The Budapest logo portrays the renowned Széchenyi Chain Bridge which spans the River Danube leading to the Henri Delaunay trophy.

“It is our duty to connect all the fans of Europe because, although we may different from each other, we share the same European values”, said Mr Čeferin, who revealed at the event that his great-grandfather was Hungarian. “Budapest will be a fantastic host”, he added, emphasising the “enormous efforts” being made by the Hungarian Football Federation (MLSZ) to develop the country’s football at all levels.

MLSZ president Sándor Csányi also expressed his pride. “I truly believe that UEFA EURO 2020 will inspire younger generations to join the football family,” he said. “Not just in Hungary, but all over Europe”.

He also expressed his delight that Hungary can be a host of the European Championship, something which can give a serious boost to the sport’s development and believes that the infrastructure put in place and the technical developments since 2010 can be thanked if the chance for the Hungary team to participate in the 2020 European Championships becomes reality. This hope of his is strengthened by the heartening fact that at U17 and U19 level both men’s and women’s teams have progressed to the Elite rounds of their age groups’ European Championship qualifiers. This is further emphasised by Hungary head coach Bernd Storck’s work which supports the receipt of opportunities for more and more young players to play at full international level. 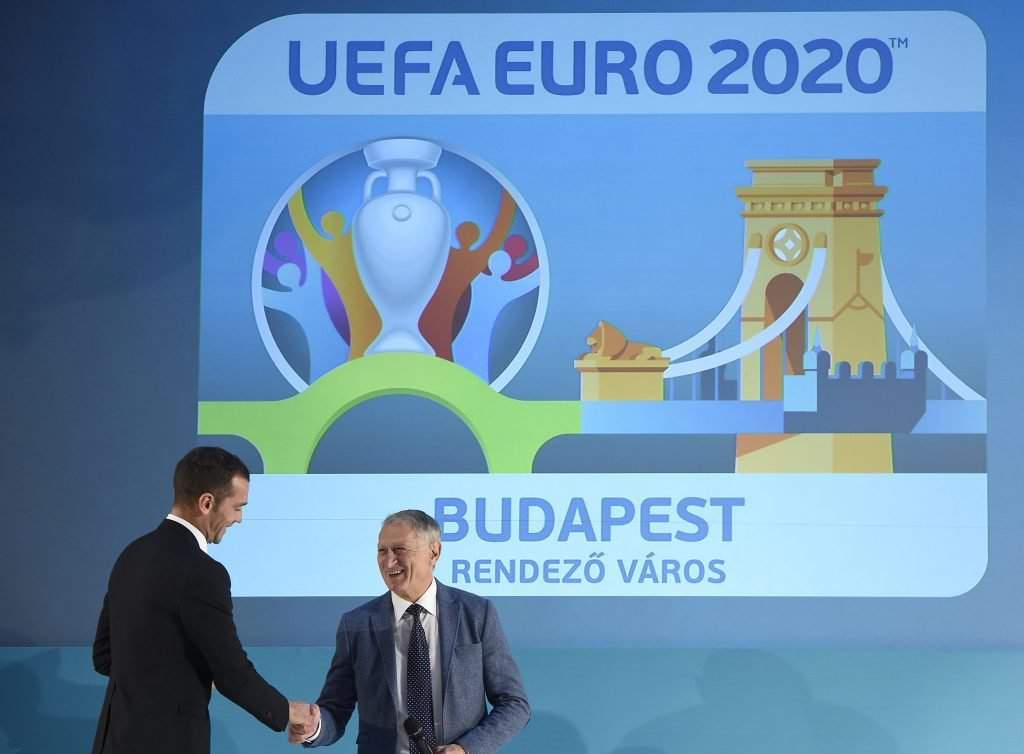 Budapest’s mayor István Tarlós underlined the passion that Budapest and Hungary holds for sport. “The capital will welcome visitors and football fans with great pleasure”, he reflected. He also stated that Budapest is one of the world’s most beautiful cities which, thanks to years of recent development, is becoming a more and more popular tourist destination and is attaining a higer and higher ranking in terms of the most enjoyable cities to live in. The mayor also reminded everyone of Budapest’s new stadia and said he would be satisfied if, in 2020, the Hungary team could repeat its feat of winning Euro bronze in 1964.

Also in front of the cameras were Antal Dunai, an Olympic football gold medallist with Hungary in 1968, and recently-retired international Roland Juhász, who was capped 95 times by his country and earned his final cap in Tuesday’s friendly against Sweden, both being unanimously of the opinion that “UEFA EURO is an unforgettable, unique experience for every football player and fan”.

It was in Geneva in September 2014 that it was decided that Hungary’s capital Budapest would be amongst the 13 cities which would host Euro 2020 matches, the plan being that the three group matches and one round-of-16 fixture will be held in the New Ferenc Puskás stadium currently in the process of being built.

Twenty teams will qualify for Euro 2020, four of which will come from the Nations’ League tournament bein held in season 2018-19.