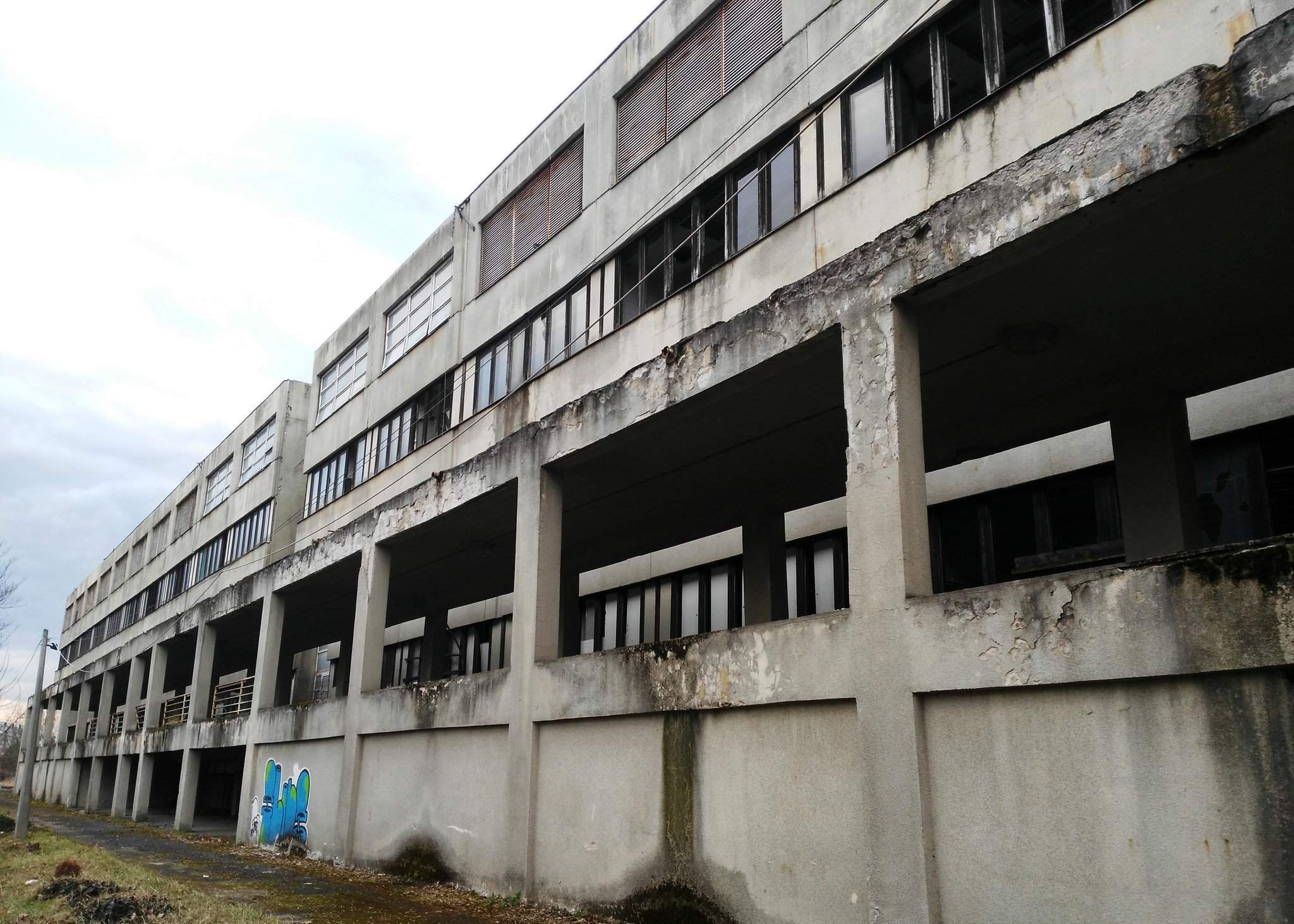 Вход – as it is written in Cyrillic next to the entrance of the former hospital in the Northern part of Budapest. The enormous building has been standing vacant for almost 25 years. Red Army’s officers’ hospital was operational here until 1991. A security guard escorted the reporter of Index.hu inside: it looks like in the post-apocalyptic world of Stalker. Dark, cold, grey walls of concrete everywhere. The floor is full of puddles. The elevator doors are covered in rust, standing half-open in some places. In the hall, a rusty bed lies next to the dried-out fountain.

It used to be one of the most modern hospital buildings in Hungary up during the mid-’80s. The surgery pavilion with 260 beds was built based on Tamás Tomay’s and Levente Varga’s prize winning blueprints. The four-story building is divided into two halls with circular corridors inside.  The hospital became available in 1985, but it did not function for long: after the Soviet troops pulled out, the Hungarian state did not have the funds to purchase the building, so the Russians took all the medical equipment. Now it is only bare concrete.

Or is it? In the community room on the ground floor, a red sign advertises the 28th congress of the Communist Party of the Soviet Union, and on the other side, a quote from Lenin can be read, which means something like this in rough translation: “We must have one motto: truly acquire military science.” Time has some interesting layers represented here: this place is used as a warehouse now, so they store the benches of a church or chapel under the Lenin quote and the CPSU sign.

The entire building could serve as a splendid scene for a war movie or a sci-fi horror. But it is not used for that purpose: sometimes police commandos use it for training.

We approach the second floor of the abandoned building. The painting of the staircase and the handrail is still in a good shape; many of today’s hospitals would be jealous. The dark and empty corridor leads to the former canteen, where Cyrillic signs tell us about the schedule. The wards weren’t designed for the accommodation of masses of conscripts: the remains of the doctor-calling devices and the lamps suggest that there were four or six beds in a room, and each of them had a balcony. One of these balconies still has a message written by a soldier: Murmansk 90. 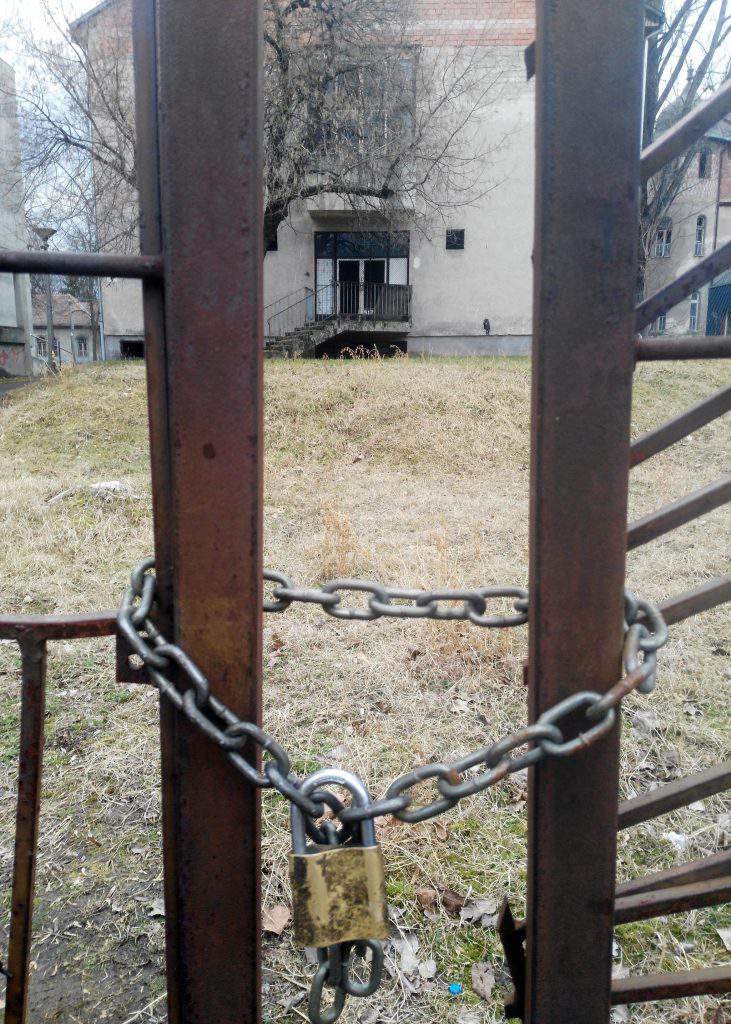 A spectacular view opens up from the top of the building. From here we can see that many buildings are standing in the surrounding territory from both the early 20th century and the ‘80s. The former workers’ hospital of Pestújhely was built in the middle of a beautiful park at the beginning of the past century with art noveau villas and Bauhaus buildings. The Red Army occupied the area in 1945, and this became Budapest’s second Russian policlinic (Гарнизонная поликлиника, Пештуйхель), which was extended by nine more buildings.

The nurse building can be seen in the opposite, along with a small socialist shop. Several buildings have been demolished by now, but not only the hospital was built here, but also nuclear, chemical and biological weapon proof service halls, bunkers and basements.

We travel back a century as we step into the wonderful art noveau villa. The old buildings in the area were built at the beginning of the 1900s as neurology sanitariums. We can see that they would be inappropriate to function as hospitals according to today’s standards, but the buildings still look gorgeous. The Russians occupied this as well, and they left even more relics in this building.

One of the rooms had bandages, infusions, pill boxes with Cyrillic Chinoin signs, rails that were used to fixate broken limbs, unopened ampules lying on the floor. In another room, we could see more bed urinals (fortunately, clean ones) among the trash and some patient records on the ground. One of them told that an officer, who was born in 1947, was recorded for traumatology in 1989. Even his radiogram was attached to the sheet.

There were multiple plans in the past 25 years for making use of the territory. The municipal wanted to establish an “Egészségliget” (Grove of health) here with clinics, therapy and rehabilitation centers, geriatric institutions, public and higher education institutions, sports establishments. One of the plans estimated the costs to be around 26-35 billion forints, but the municipal did not have such funds.

The process is even more difficult because nine of the buildings are under protection as monuments. The territory has been partly state and partly municipal property for a long time, until the state gave its rights of property to the municipal in 2014. An agreement was signed in 2014 between the Chinese and the Hungarian government that they will establish the Central and Eastern European Traditional Chinese Medicine Teaching, Healing and Research Center in Budapest by 31st December in 2018.

They were waiting for the opening to the East

However, nothing happened for a long time. During the municipal elections in 2014, DK (Democratic Coalition) representative László Hajdu was elected as mayor, while the body of representatives still had a Fidesz majority. The mayor signed a memorandum of understanding with Asia Center’s Chinese investors in 2016 that a 30-billion-forint investment will be carried out with a Chinese medical center and other constructions. This went against the governmental ideas. The body of representatives of District XV with the Fidesz majority, two MSZP, one Jobbik and one LMP representative voted against this initiation, because they stated that the Chinese private investors would exclude all the residents from the improvements.

The state began to act this year, because the deadline of the end of 2018 is closing. The state asked for four buildings’ 100 percent property rights from the municipality, which was passed by the body of representatives on 28th February.

The business has begun, though the government gave instructions to organize the Third Ministers Conference on Health between China and the Eastern European countries and a medical exhibition. 430 million forints were reserved for that purpose.

It must be demolished to its structure

By the end of February, a bill was submitted about the establishment of the Chinese medical center, but Ministry of Human Resources refused to answer any of Index’s question.

Thought new buildings don’t need to be built, the costs might skyrocket. Former leader of the surgery block built in 1985 Tamás Tomay said in 2013 that the building hardly meets any of today’s standards. Neither the doors and windows, nor the panels are adequately insulated, so the building must be demolished to its structure. The structure might mean the 30 percent of the overall expenses. But the change of doors, windows and panels might cost at least 2 billion forints.