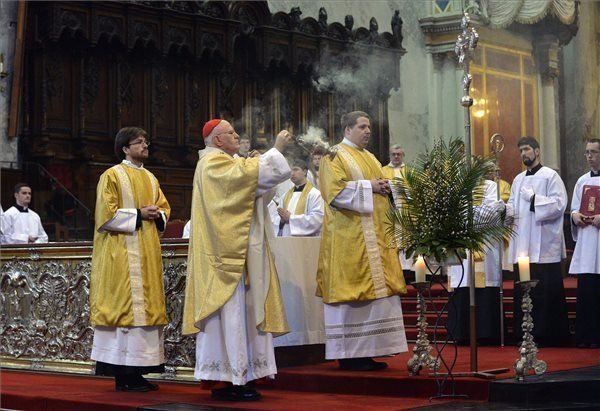 (MTI) – The death and resurrection of Christ has shown that God the creator and redeemer has not forgotten about humanity and awaits all to “come home” to him where eternal bliss is in the making, Cardinal Peter Erdo, head of Hungary’s Catholic Church, said in his Easter message on Saturday.

Cardinal Erdo, Archbishop of Budapest-Esztergom, said the message of Easter was a certainty about man and his place in the world, about having a purpose and a goal in life with somebody overlooking the fate of humanity with love, he said.

On the evening of Holy Saturday Christians contemplate the death of Christ on the cross and hold vigil while Easter starts in Catholic churches. Cardinal Erdo will celebrate mass at the St Stephen Basilica in Budapest from 6pm on this occasion with a procession and vigil to follow, a statement from the Hungarian Catholic Bishops’ Conference said.

The head of the Hungarian Reformed Church’s synod, Istvan Bogardi Szabo, said Christians are reminded each year at Easter time that “the resurrection of Christ is not a myth, but a fundamental fact which guides the lives of Christians”.

Hungary’s Jewish community celebrates Passover, or Jews’ exodus from Egypt, which falls on the same days as the Christian Easter holidays this year, Andras Heisler, the head of the Federation of Hungarian Jewish Communities (Mazsihisz), said. He said this symbolises the common roots and togetherness of Jews and Christians.