Are you familiar with the most-known Hungarian cake in the world? You may not be acquainted with József Dobos’s name in itself, but Dobos cake could be more familiar if you have ever visited a Hungarian confectionery. CNN has come to Budapest to visit the most elegant confectionery of Budapest called ‘Gerbeaud’, the place, where you can get to know about Dobos cake the most.

Not only is Dobos cake widely-known in Hungary and Europe, but also in the United States, it seems. CNN has visited Budapest and made a short documentary on finding out, what is the secret of Hungarian Dobos cake, how it is made, and what is its history. The video was shot in the kitchen and hall of the confectionery ‘Gerbeaud’, which is located in the heart of Hungary’s capital city: Vörösmarty square 7-8., Budapest.

In the video, Anna Niszkács – Manager of the confectionery – tells the reporter that Dobos cake has 6 layers, with one extra delicious caramel layer on top, good-quality chocolate, cocoa and some fluffy sponge. Hopefully, the American reporters liked to taste it, and tourists who visit Budapest or other parts of Hungary would find Dobos cake delicious.

WHO WAS MR. DOBOS?

József Dobos C. lived from 1847 to 1924 in Austro-Hungarian monarchy and worked as a confectioner, MasterChef and cookbook writer.

He was born a descendant of a famous cook dynasty and has been learning how to cook pastry alongside with his father at the prestigious Andrássy family. He first opened his sweetness shop in 1878. The original idea of a new cake was that it had to be one that is easy to conserve for weeks, since refrigerators were a rare piece. The first time he had created Dobos cake was in 1884 and in 1885, Dobos presented his cake at the Hungarian National Exhibition, where even the emperor and the queen of Austro-Hungarian Monarchy tasted the delicious cake and liked it. Legend has it, the boy, churning the butter in a bowl made a mistake when he added sugar instead of salt into the cooking bowl. Thanks to this mistake, Dobos created the perfect butter cream on sponge cake. So this and its chocolate and caramel topping made it so irresistibly tasty and widely known across the Globe.

Little after the exhibition, Dobos started a European tour, carrying Dobos cake on carriages and presenting his masterpiece for Western European confectioneries.

Although József Dobos promoted his cake widely, he did not tell anyone the secret of the recipe until 1906, in the year of his retirement, he handed the original recipe to an industry, Hungarian Confectioner and Gingerbread Bakers Craftsmen Corporation. 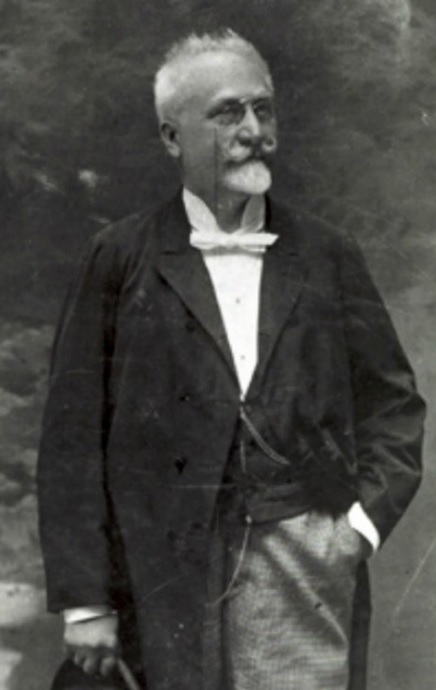 After retirement, he invested lots of his properties into military law, which at his elderly age made him relatively poor, but his cake and expertise in his profession made him retire as an honorable person.

“You need 6 sponge layers for a 22 cm cake. For the sponge layers: you mix 6 egg whites to a hard mousse with 3 lat (50g) powdered sugar, then mix the egg yolks with 6 lat (100g) flour and 2 lat (35g) melted butter. For the cream you will need: 4 eggs, 12 lat (200g) powdered sugar, 14 lat (235g) butter, 2 lat (35g) cocoa powder, 1 lat (16g) vanilla sugar, 2 lat (35g) cocoa butter and 1 bar (200g) of chocolate. You need to beat the eggs with sugar over gas until it heats up, then take it off the stove and mix it until it cools down. You cream the butter, add the vanilla sugar, the melted cocoa butter and the slightly heated, soft chocolate. Then you mix up with the cooled eggy mousse, fill in five sponge layers, pour caramelized sugar over the sixth layer and cut it into 20 pieces.”