Budapest, March 29 (MTI) – The pro-government Peace March, organised by the Civil Union Forum (COF), started from Alkotmany Street, in front of the parliament building, early in the afternoon today.

MTI’s on-site correspondents said the crowd completely filled Alkotmany Street, even as many participants stood in Kossuth Square, in front of the parliament building.

Before starting, the marchers sang the Hungarian national anthem and the Szekler anthem, waving Hungarian flags, Szekler flags and banners of COF and governing Fidesz. The march, held a week before the national election on April 6, will wind up at Heroes’ Square later in the afternoon. The marchers carried placards with the names of the cities and towns they came from as well as messages such as “We are convinced a nation can be built only with moral integrity” and “Peace March for Hungary”.

Szeles said, while marching, that 400 buses had arrived from communities outside of Budapest to participate in the march this time around. He estimated the total number of participants would reach one million. 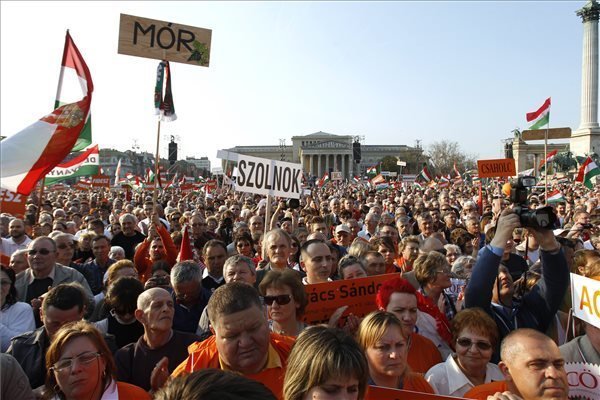 When the marchers reached Arany Janos Street — almost one-third of the length of the route — the organisers said the last marchers were still leaving Kossuth Square.

Istvan Stefka, editor-in-chief of daily Magyar Hirlap, said this Peace March was just as important as the first, organised in January 2012, when “our independence” was in danger. He called today’s march the “waiting room for next weekend’s election”.

Bencsik said Hungary was not a divided nation, as evidenced by the Peace March, whose participants he called “real heroes”. 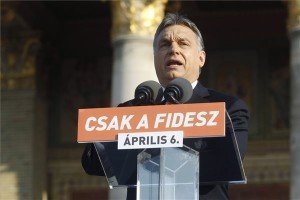 The marchers were met by protesters holding flags with images of Prime Minister Viktor Orban and Russian President Vladimir Putin — likely a reference to Hungary’s agreement to upgrade its sole nuclear power plant, in Paks, with the participation of Russia — along the route. Activists from opposition LMP offered the marchers green apples, but were rejected with whistles. There were no serious incidents during the march.

The interior ministry estimated that 440,000-460,000 people participated in the march. Tamas Csizmadia, the ministry’s press chief, said a more precise estimate could not be given because relatively accurate numbers can come only from open spaces, not from smaller streets.

The left-of-centre alliance of five parties said Orban’s speech at the rally on Saturday was “arrogant, inflammatory and a lie”. Viktor Orban knows the majority of the country wants change and a change of government, and he knows that he can lose the election, the alliance said.

The alliance said in a joint statement that Orban had promised one million jobs, but just a few had been created in the private sector. He spoke about modernising the country, while taking hundreds of billions out of the health-care system and education. And he talked about equitably sharing the public burden, while introducing 40 new taxes, the alliance said, adding that eight of ten Hungarians are worse off with the flat-rate tax system.