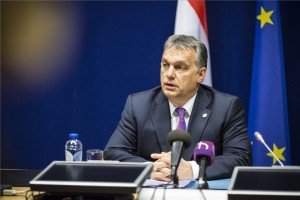 Orbán said the favourable outcome of the negotiations with Britain for the V4 group was a result of the joint efforts of Hungary, Slovakia, Poland and the Czech Republic.

The prime minister said Britain’s demands were about making the EU stronger and thus more competitive. The deal will make the EU more proactive on the global economic stage, which will be key in the future even if Britain were to leave the union, he said.

Orbán said the fact that Britain will remain open to EU citizens looking to work there is a collective success for the other 27 member states.

He said the deal guarantees that Hungarians working in the UK will not be discriminated against, and that they will continue to get “what they have paid for”.

As part of the deal, child benefit going to children living outside the UK, whose parents are working in the UK, will be indexed to the standard of living in the country where the offspring are based. EU workers whose children are living with them in the UK will be entitled to the same child benefit payments as British families.

“We did everything we could. The [next] decision is in the hands of the British people,” Orbán said referring to the UK’s EU membership referendum planned for June 23.

Concerning Europe’s migrant crisis, Orbán said EU leaders acknowledged at the summit that Europe’s borders must be protected and the migrant inflow stopped. EU leaders also agreed on the need for all member states to observe the Schengen rules. This marked the first time that the EU accepted Hungary’s proposals on the matter, Orban said.

The prime minister noted that Hungary’s stance on the migrant crisis was clear and consistent all along: migrants need to be stopped, checked, identified and turned back, in line with the Schengen Agreement. This may be a difficult and expensive task, but it worked in Hungary’s case, he said.

Orbán said this is the response Europe should have implemented at least a year ago. He said the western Balkan countries and Austria “have started to do the right thing” by building fences and turning migrants back, which he said is the only way to protect the continent’s southern borders.

Meanwhile, the situation in the west “is getting worse”, he said, referring to western member states’ stance that migrants should be accepted and distributed across the bloc.

The following weeks and the migration summit in March will be about challenging and defending against this policy, Orbán said.