You don’t have to drive hours from the capital to find a hidden, quiet village, which seems like the island of peace, by all means. If you take some time and browse the map instead, you’ll be surprised to see that you don’t even have to leave Pest County. In fact, you can save even more time by reading the article and the list that was put together by travelo.hu.

Hungary has some “strayed” villages, like Kiskundorozsma, that is not in Bács-Kiskun County but Csongrád, Győrvár in Vas County and Jászkarajenő in Pest County, instead of Jász-Nagykun-Szolnok County. The reason behind this is that the village, more exactly the former region of Jászkara, was the plain of Jászalsószentgyörgy, where the Jász people, caring for crop and stock farming, lived from spring until autumn, even in the 19th century. The village was annexed to Pest County in 1876 with the law concerning county borders, and Jászkarajenő counts as the county’s most south-eastern village since then.

The village has 2700 dwellers and two churches from the end of the 19th century. The more spectacular one is the gothic style Catholic Assumption church. Another local curiosity is also unmissable: the Márton Csonka nature trail. Its eponym inspired the famous Hungarian writer, János Arany’s main character in his A vén gulyás (The old herdsman) poem. The nature trail is eight kilometres long and has five stops, and it leads visitors to an unrevealed Árpád-time cemetery, an acacia forest and a coachmen’s track.

Islands are always rich with nooks and Kisoroszi lies in the northern corner of the Szentedre Island. It’s truly isolated as the only path that connects it with other villages is frequently flooded by the Danube at the time of bigger inundations. The last time this happened was in 2013, when you could only reach Kisoroszi by boat.

It first belonged to Nógrád County, then to Pest County. The two counties had a long argument about the village. Nógrád County almost used military forces in 1695 but, in the end, Kisoroszi stayed in Pest County.

Several artists lived here, probably because the capital is reasonably close, and also because of the magical and luscious natural surroundings, the view of the beautiful crags of the Pilis Mountain and the silence. Writers István Fekete, Miklós Mészöly, Alaine Polcz, Péter Nádas and painter Lajos Sváby all chose Kisoroszi as their home. But the most famous local is probably Lajos Illés, the founder-eponym of the epoch-making Illés band, who was the cantor of the Calvinist church until his death in 2007. 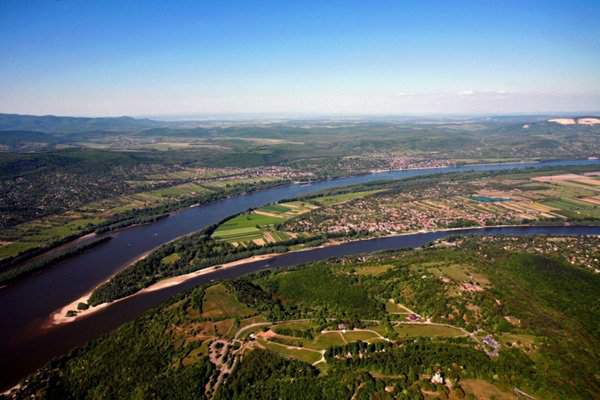 Makád lies in the southern corner of the rather depreciated Csepel Island; it is the last village on the island path. 1100 people live in the uniquely beautiful natural environment of the village, where – as it’s a dead-end-village – only those go who live there or have to run errands there. Even though Makád is not a ghost-town you don’t really see crowds travelling in that direction.

It was a significant village on the Csepel Island even in the 17th century and it was an important pillar for reformation. Its typical, Louis Seize style church, standing in the centre of the village, was made with the utilization of the stones of the former building. There are excellent fishing spots around the village at the coast of the Danube, but you can also go hunting or hiking to Lake Kengyeles or in the direction of Pest County’s second smallest village, the neighbouring Lórév.

Even though it lies on a road connecting two cities, you don’t feel the transit traffic in the mountains. It’s halfway between Szentendre and Visegrád, on the serpent-like, quirky, uphill “backway”, among forests. More than a thousand people live in the Visegrád Mountain’s highest village at 360 metres and 10% of them are Slovakians, who are the descendants of settlers from the time of the expulsion of the Turks. 400 people were relocated in 1947 as part of the population exchange. Nowadays, the population is slowly growing due to people moving there from Budapest.

According to travelo.hu, King András III built a hunting-box in his favourite royal hunting region, which was later turned into a monastery by the Pauline. This was where Máté Csák acknowledged Róbert Károly as the Hungarian king in 1308, but King Lajos Nagy and King Mathias also fancied visiting the monastery. The ruins can still be visited, and you can also look up the Hoboji Zen Temple. The popular spots of the mountain range, like the Rám Cleft or the Dobogó Rock can be easily reached from Pilisszentlászló. You can also hike to Szentendre and Visegrád or relax at the coast of the Danube.

Pest County’s and River Ipoly coastline’s smallest village can be easily found on an outline map in the curve of River Ipoly. Tésa is the county’s only village with less than a hundred dwellers. The famous berry-grower region got to the periphery in the 20th century, thus its economic situation also declined. However, since the joining of the EU many bridges are built to connect the coasts of the river as part of projects, so the region is becoming more and more vital. Despite these developments two buses per day signify transportation currently, and even those only take you to the neighbouring Vámosmikola, so it takes two transfers to get to Budapest, 100 kilometres away.

In the 18th century, the local Foglár family built a one-floored baroque palace in Tésa, where they later hosted famous Hungarian writer Mór Jókai and the nation’s poet Sándor Petőfi. The palace later became the property of the Jankovich family, from which Béla Jankovich became Hungary’s Minister for Religion and Education in the early 20th century.