Budapest (MTI) – Giraffe calf has born in Budapest Zoo, who received the name Ikinya. The male giraffe was 170 cm tall at his first standing, but he grew 10 cm in 5 days.

Ikinya name is popular among Kiku, which is the largest ethnic group in Kenya. It means “one step” – said the institution to MTI.

The animal, which was born on January 31st, is the 30th giraffe calf of the zoo.

Ingrid the dam was born in January 2007 and arrived in Budapest from the Prague Zoo in spring 2008. Although she is young with the age of 8, she is not unexperienced because she has given birth to and also successfully raised a calf in 2012. Akin, the 6 year-old giraffe bull from Magdeburg became a father for the first time. The little Ikinya and his mother are currently in a separate stable, so at the moment the visitors cannot see them, but if the weather permits, the animals will be released to the paddock the next few days, then they will be let to the other giraffes, MTI said.

The Budapest Zoo has giraffes since 1868; the first animal was given to the zoo by Franz Joseph, by the intercession of the Queen Elizabeth. There were times when giraffes were missing from the zoo, but they are held without interruption since 1965. 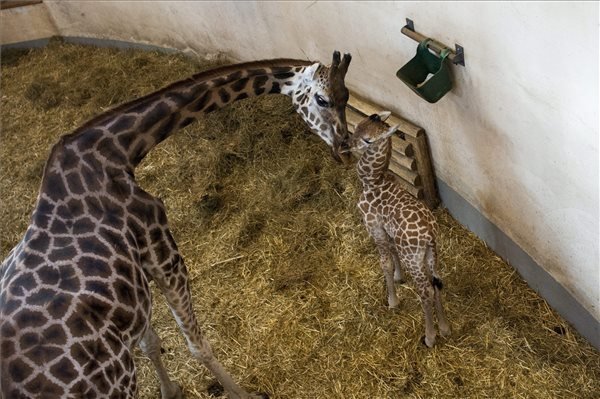 The first giraffe calf was still born in 1868, since the first animal was pregnant.

According to MTI, giraffes are native to Africa, spread in fairly large area, although their habitat reduced significantly as a result of human activity in the last hundred years. Within the large distribution area, natural conditions are not the same so giraffes from carious areas are different each other due to the adaptation to local conditions.

Giraffes do not constitute a single species, there are also subspecies. The endangered Rothschild giraffes – in other name Uganda giraffes – are held in the Budapest Zoo. They are originally native to Uganda, South Sudan and Kenya.